“suddenly the cabin is filled with smoke”

You get teams and you get TEAMS! You get friends and then you also get FRIENDS!

We hook up Fossa Ford Anglia for a scenic tour to Zwartkops Raceway for our first anniversary race. Chris “The Roach” has to work and we go via Imperial Toyota.

Friday, 26 July, the place Zwartkops Raceway. Our first event with the distributor supplied by Gerdus.  Annalie take control of our new Canon. Had we known what was to happen, would we have done things differently? We arrive trackside at about 09h30. The first of the on the space allocated to the ‘Little Giants”. We get to pick a space. Annalie suggests we do not take our usual spot as then we do not finish a race. Well, new spot selected, we pitch camp more literally than we thought or you can imagine! 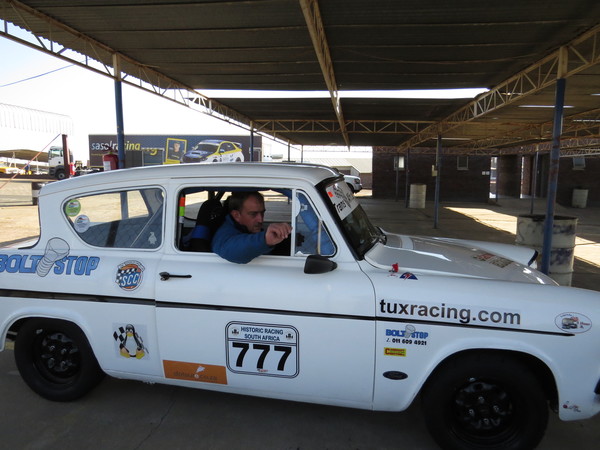 The usual pattern follows, little did we know! Unpack Fossa and swop her tow tires for her semi-slicks, do documentation, do scrutineering ….. For a start all single seaters have the track together followed by the tin tops. 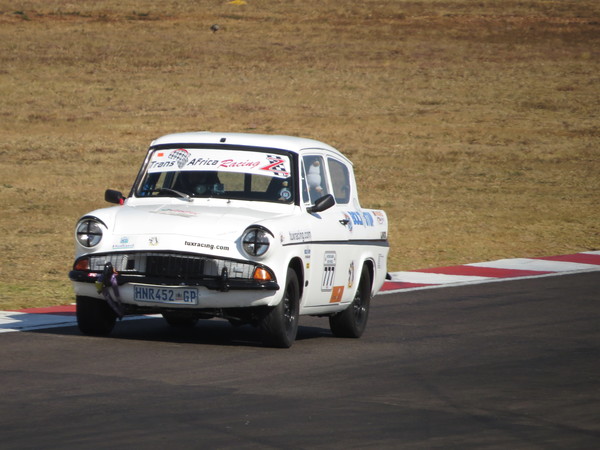 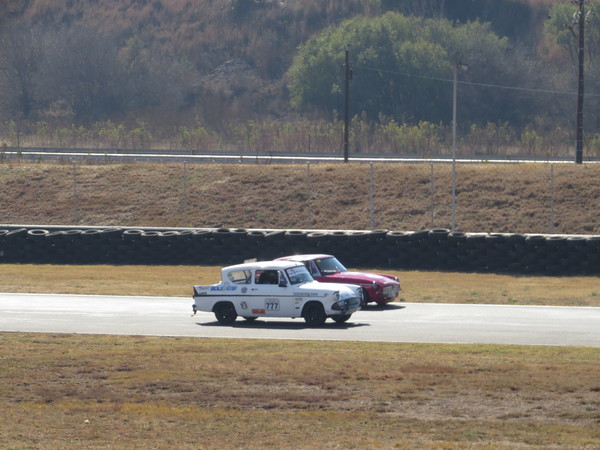 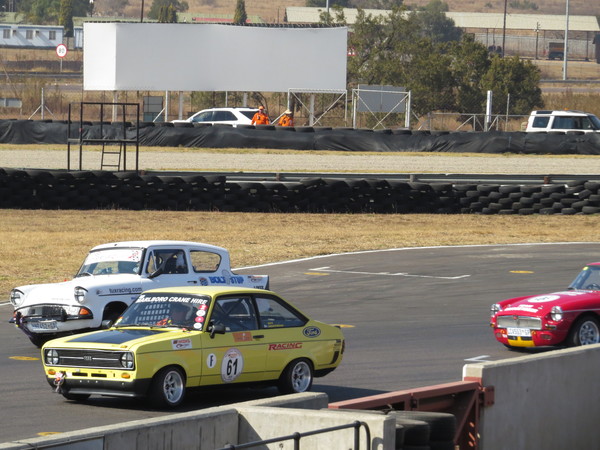 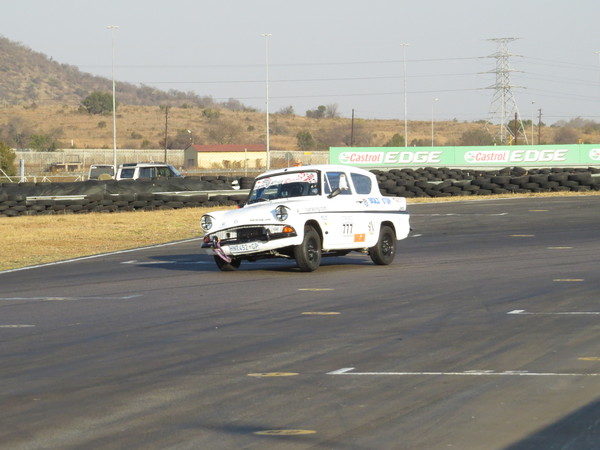 Going around the right hand corners watching the mirrors I can see smoke coming from her tires and Fossa colouring in the track with a black line from her right rear. 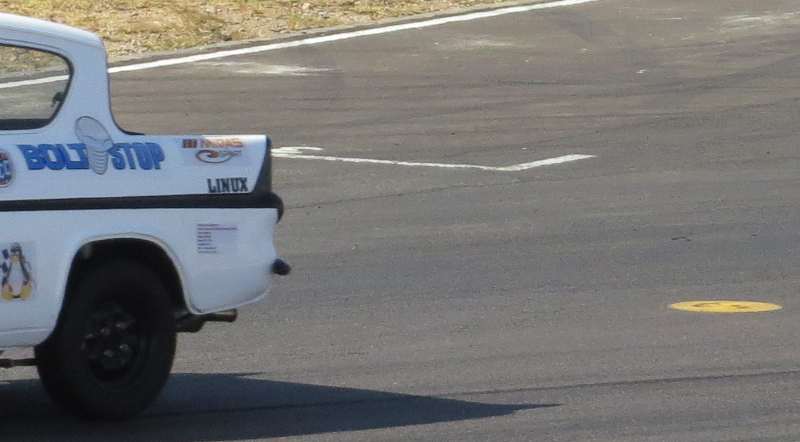 Black line on a lefty

…. During run three on what was to become our final lap, exiting corner seven suddenly the cabin is filled with smoke. In my mind I start to prepare to grab the fire extinguisher, watching for the flames to start leaking into the cabin and past the bonnet ….! It is decision time, my mind racing analysing the situation with a sense of disappointment, Chris Roach’s last words the morning “do not break her!” It is a smell that smells vaguely familiar but I can not put my nose on it. I immediately pull into the pits with none of my minds flames. Another nose, Annalie’s suggest a electric short and I do find a wire has has melted. I check all electric systems and find everything working, tape up the open wire. Problem sorted ? ? ? ? ? ? ?

RUN FOUR. 16h13. Best time 1:28.23. 135.3 km/h …. an uncanny shudder appears running at speed down the main straight, only three laps in exiting turn five that smell again, a little smoke AND THEN NO DRIVE!!! Clutch slipping, I coast into the pits making a note to keep the speed slow and constant as it is an uphill entry to our “spot”. It is with great disappointment that we have to inform Chris on his way home of the latest developments and yet more decisions have to be made. We return home to feed our animal children, collect additional tools, spare and used clutches and pressure plates, bedding, clothes toothbrushes etc. and back to the track. In minutes we start stripping Fossa’s gearbox. It is getting colder. 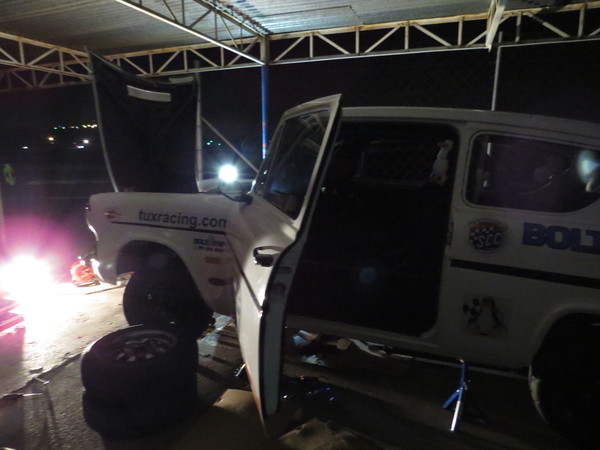 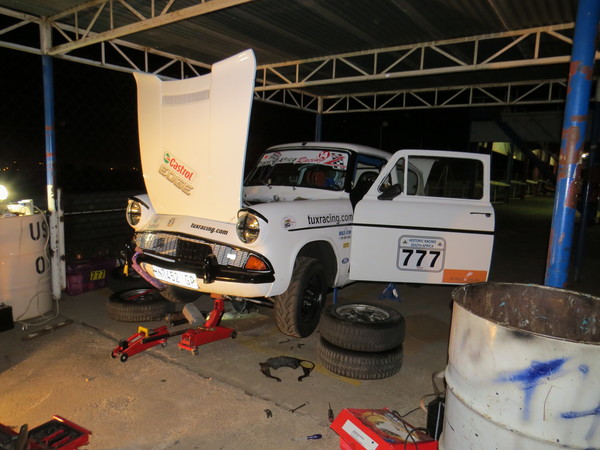 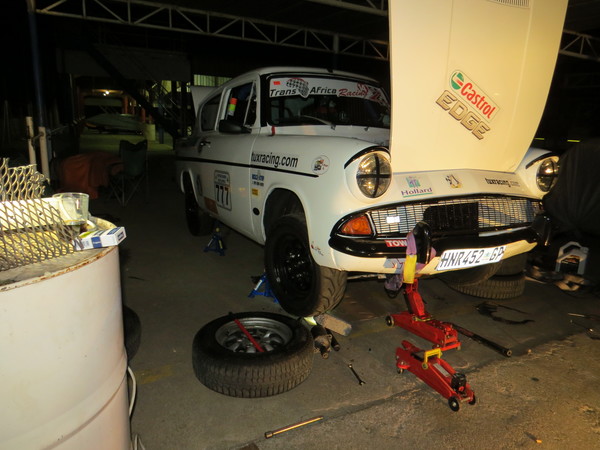 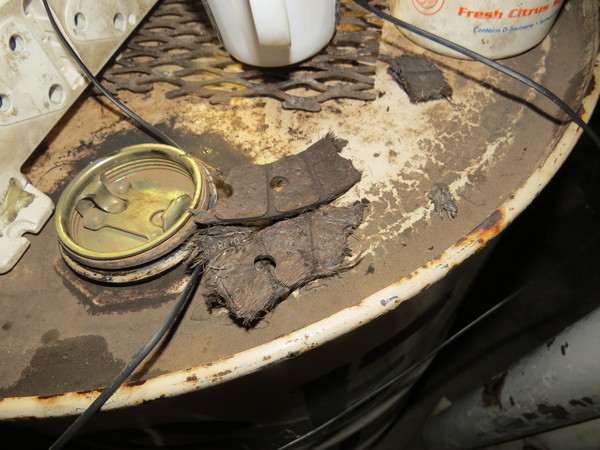 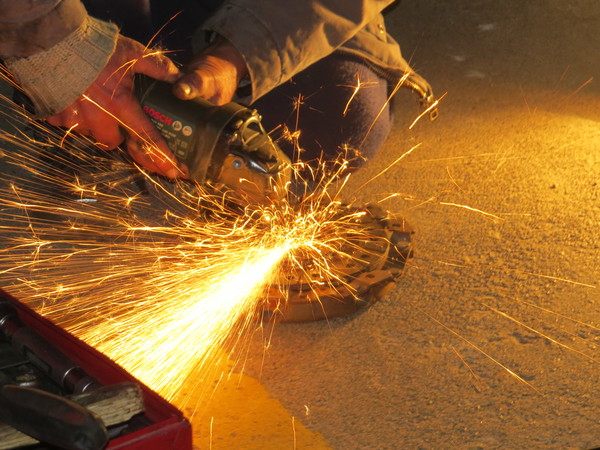 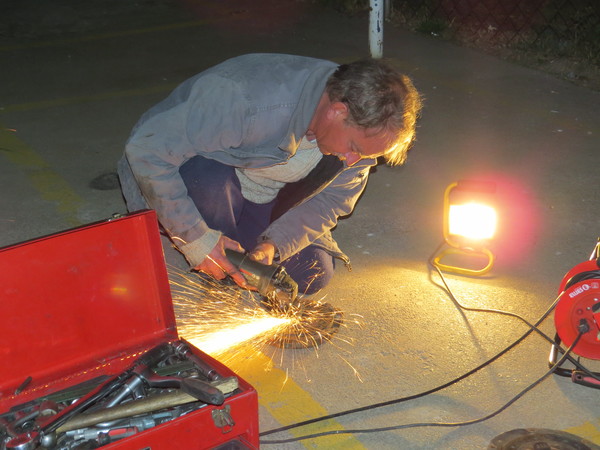 Highly reputed Sachs Power Clutch kit. Three race weekends. R1500.00. Replaced not because we had to, because we did not want to do this work shortly after rebuilding her engine. The machine marks on the pressure plate have not even started wearing in. The clutch plate PIECES still have the white Sachs printing on the clutch faces. Annoyed? Angry? Absolutely the MOER in? The most of our racing friends state it is a faulty clutch plate and we have to return it. You think I will be capable of doing that without swearing and cussing the suppliers? I rather just don’t. One racer commented that it is due to hard down shifting. Maybe, but then it is no friggen “Power Clutch Kit”, more the a “Sponge Clutch Kit”! We modify a spare clutch supplied with Fossa when we purchased her, only to find the plate not to be a perfect match for Fossa’s input shaft and our final resort is the plate replaced in the first place with over two hundred and fifty Zwartkops Raceway laps on it.

Somewhere during the replacement it turned into Saturday. Did I somewhere mention it was cold? Well, even if I did, it was COLD! It was extremely flippen COLD. We were CCOLD with the CCCOLD penetrating into our bones. What kept us going? Adrenaline? Madness? A state of craze? Passion? A desire to be successful? I can not say, maybe the occasional hot coffee helped. Any way we call it quits for the night somewhere after three in the morn and settle in to our Cortina best we could.

We are awakened by a ruckus caused by security guards between our tools that quickly dissipate as my knee presses against the Cortina’s hooter somewhere before five. And guess what, it is still cold and dark! We quickly finish the job, clean up our space and ourselves. And we are tired. We promise ourselves some sleep before qualifying and between races.

A lot of discussion on clutches with plenty fellow racers, pro’s and cons. We have decided to go copper button clutch pending price. If it holds out in Locust’s, it should hold in Fossa and not disintegrate!

Qualifying, Somewhere after nine AM. I was informed by Clerk of the Course to have the no 14 sticker indicating “Little Giants” on the windscreen or else I would not be let out on track in slots allocated to us. We run a 01:31.51 and qualify in 18th position of 24. Pulling into the pits Fossa refuses to idle and struggles to start. She had managed to lose her distributor lock down bolt and have done some timing adjustment of her own! 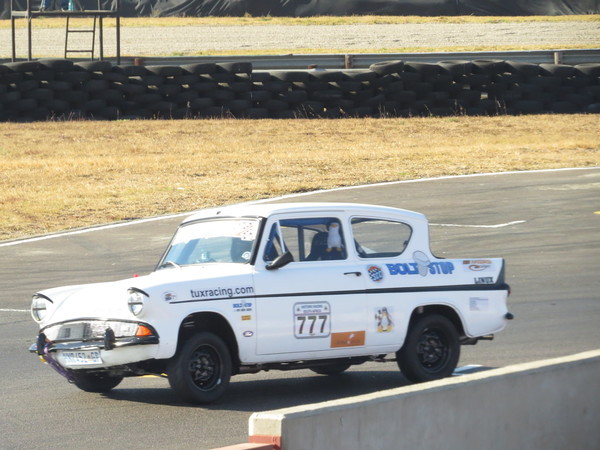 Race 1: None of the self promised sleep. Our best starting position yet. The race starts reasonably routine. Fossa clearly showing more speed than Colin Ritchie’s Hillman Imp catching up rapidly down the straights and Steven Kernick’s MGB breathing down my neck being faster on the corners. 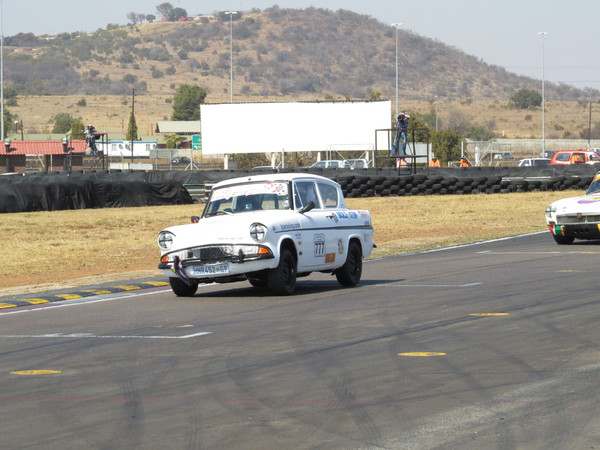 I make the decision to overtake the Imp and do with relative ease with that MGB following suit. At least I now have clear air in front of me and without the Imp restricting our top speed are able to build a slightly bigger buffer between us and the MGB down the straights. We finish in front of the MGB in 16th place. We do not have many pic’s of the race as Annalie was supporter first and photographer second, apparently screaming so loud we are surprised the track did not get calls about noise pollution.

Suicide ride: We offered to assist with the suicide rides of the day and was brought a track marshal for treatment. A young lady, did not get her name. *EDIT*
Kerri Friskin *END*.  She commented that she liked the leaning tower of Fossa! 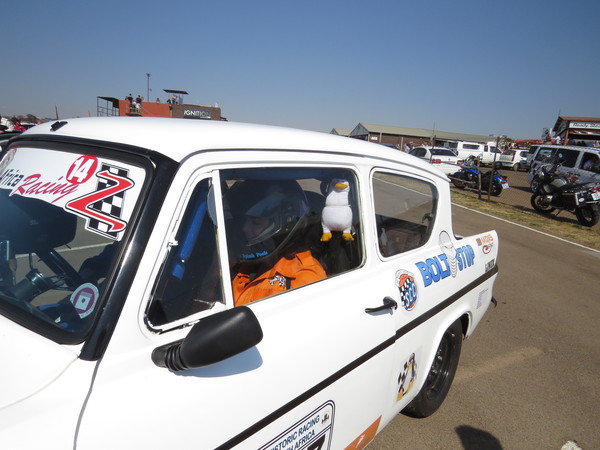 Suicide ride – One of the track marshal’s, Kerri

My experience as a suicide lap victim :

It was my first time going in a race car like that around the track and I absolutely enjoyed it !! The way it went around those corners so accurately really made my experience worth it ! I would definitely do that again 🙂 thanks to all who made it possible .
Kind regards
*Kerri* =) 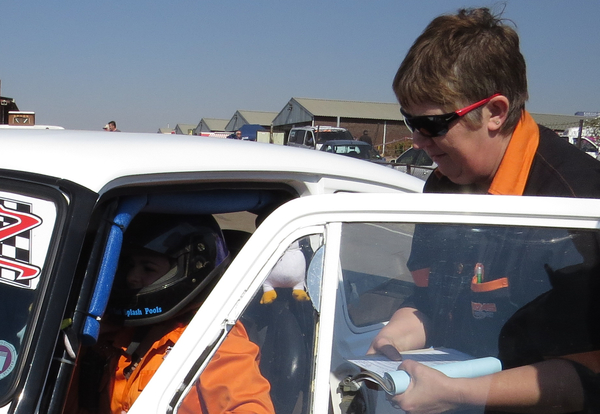 Just sign this indemnity in case one of the penguins bite you!

Race two: None of the promised sleep …… Edge and Red Bulls order of the day. We are placed in position 16. No run of the mill racing this time. Pretty tired with blood shot eyes, low level afternoon sun, Fossa not wanting to run under 4000 rpms …… Lack of fighting spirit. Whatever, Cameron McLeod’s MGA mysteriously appears on exit of corner eight passes me and Steven Kernick follows through without any resistance. I make a point just to keep the following Imp in my rear view mirror. 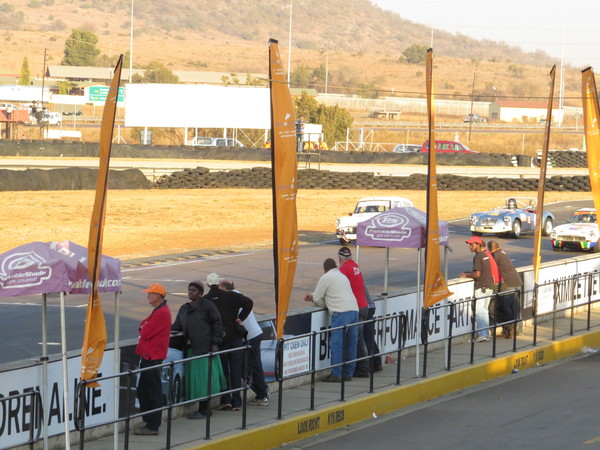 Fossa about to be overtaken 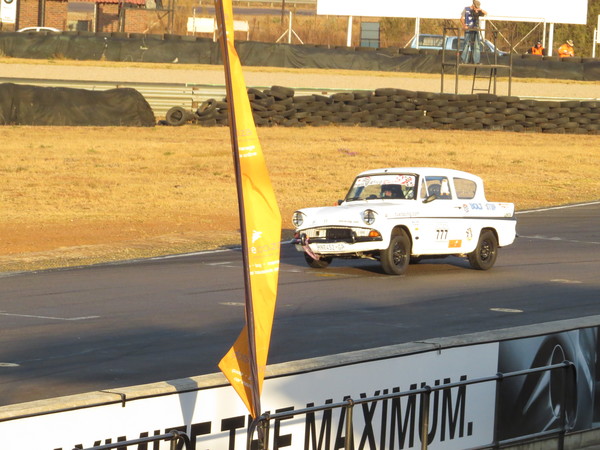 We manage to finish third in Class U. 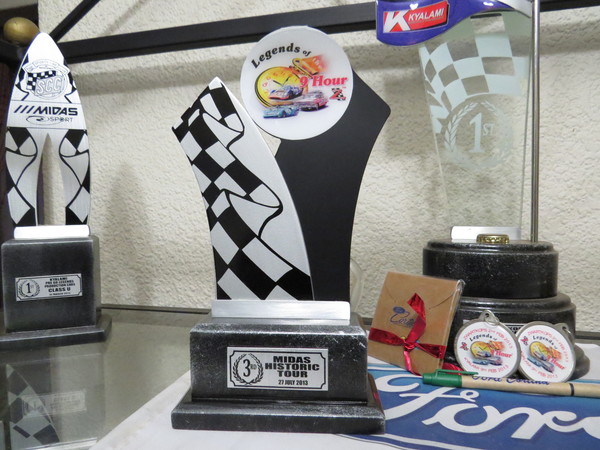 I have recently often thought which of our trophies were the most deserved. It is impossible to say, for everyone we have had to work hard. Every one has a story. This has been our first really exciting race as the improvements and growth on Fossa has at last got us somewhere in the mix.

*EDIT* – A year ago we were in a battle with a friend,  John Martin’s DKW. He said we would move on. I just could not believe him, yet a year later we were fast enough to overtake him. This is when you realise what a few seconds on a race track does. *END*

Thanks to our friends and supporters. These guys kept us motivated, entertained and offered advise. Thomas Falkiner, Gerdus Smit, Denzil Bhana, Mari Ducasse, Gary Stacey, Hein Scheepers (Bolt Stop), Colin Kean and Paul Perriera. You will never know how much the support meant to us, THANKS!

And mostly, thanks to the rest of my team. Without you there would have been NO RACE. Stripping Fossa’s guts, replacing the clutch and reassembling without an extra bolts remaining in what felt like freezing temperatures. My body still have the cuts and pains. I can see the individual wear and tear. Thanks for the effort. You could have easily opted to skip the race. THAT IS KICK ASS!

Thanks Annalie and Chris “The Roach”. TUXRACING RULES!!!!!!!!