Gauteng, South Africa. The winter decides to start showing it’s might two days before the race. Cold, no freezing, someone commented reading -4°. Saturday morning, 05h00, Fossa is loaded and we are on route, VERY high on expectations ……..

Arrive at Zwartkops Race 05h40. Gates closed, standing in the queue …. gates open shortly before six we enter and find a spot. I reverse Fossa from the trailer and pull her to the selected space, but her steering is weird, almost like a power steering car of which it is not working. movement is also feeling restricted …. Take her for scrutineering, maybe it is just my imagination. Even looking at her I can visibly see tow-in …            Very high expectation to this …..

Suddenly there is a choice, blend into the environmental freezing cold and with draw or try and fix. We opt for the latter. We lift Fossa onto a pair of trestles, crawl in underneath to rectify the tow in using a length of wire. The bigger question remains, how did this happen to attempt at preventing it from happening again.

Qualifying: I pull onto the track with dashed hopes, she is still pulling to the left hand side … A very cautious two “fast” laps. Seating her new brake pads, some more engine running in. We achieve a starting position of 25th with a time of 1:32.638. And we still do not know if we will be racing or not. Back up onto the trestles, armed with the knowledge of the track time. We find one of our front lower arm restrictors broken. We remove the mod from both sides and put in place a temporary solution. Re-measure the wheel alignment and make the required changes.

Race one: I drive Fossa to the pre race paddock not knowing what to expect, she feels MUCH better, but I am hesitant to predict completion. Our teams prior discussion will have me go out to see how Fossa behaves and make a judgment call based on that. The safety of myself, fellow competitors and of course Fossa takes preference! 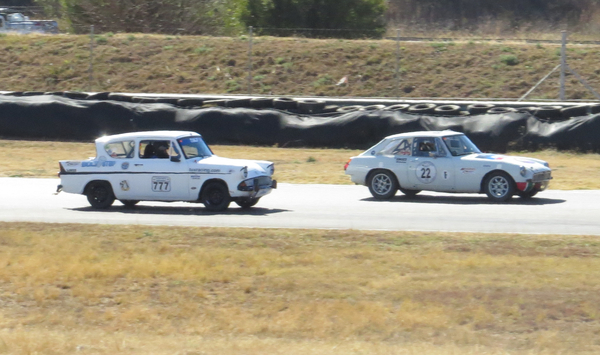 Placed in front of me, the MG last time driven by Steven Kernick, this time as per time sheet, with Cameron McLeod behind the wheel, and behind me my nemesis from two years ago, the DKW driven by John Martin. I head out on track, her steering response feel better than in a long time. I make sure to get some temperate in the tires and it is go, go, GO! It is very quickly obvious that Fossa is by far faster than the MGB down the straights. I pull alongside the MG just before the fourth corner and not knowing what Fossa will do hugging the inside of the corner, fall back. I suddenly remember I did not start the GoPro and switching it on give the MG a little more space. Catch up proved little challenge and with Fossa on a nice trot pulled alongside and passed. That was the first success of race one, the second was improving our time from 01:28.18 to  01:27.920. And the third, finishing the race with Fossa in one piece and all mechanicals working. VIDEO FOOTAGE.

Race two: After only filling Fossa with sufficient fuel, we head out to our second race. This time we are placed behind my next target, Paul’s BMW 700, that would however mean breaking out of class U, and followed by the MGB, the DKW and a non finisher of the first heat another MGA driven by Stephen Britz.Then there is the screaming competition at the wall, Annalie for Fossa and Steven for the MG’s! Apparently that is so close, it’s a photo finish! 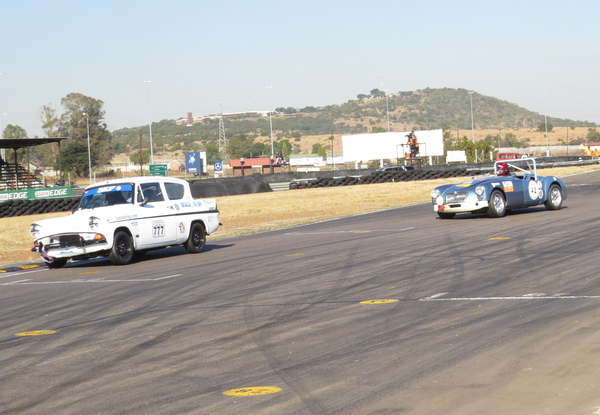 I seem to build a little space in front of the MGB and the MGA passes the DKW and the MGB. Soon I have Stephen in the MGA breathing down my neck. And the race is on with the MGA even passing me on corner two for a few brief seconds. Going around corner six I have Fossa hopping on her left front. Once again Fossa’s straight line speed proves to much for also the MGA. We achieve yet a better time! 01:27 596! Paul’s BMW 700 is injured and falls by the way side giving us a first place for class U. Our other prizes, a box of delicious Frankie’s Hot Chocolate with marshmallows, Fossa that is mechanically 100% and in one piece. Yet another first, we were not lapped! VIDEO FOOTAGE 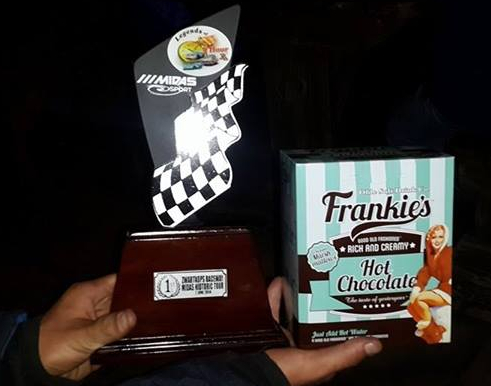 It is race days like these that makes the hard and sometimes frustrating work behind the scenes worthwhile.

We do however plan to repair and improve the front suspension mod, possibly lowering Fossa in the front and the rear by a centimeter or so. That should improve her center of gravity and possibly further reduce her leaning through corners.

Happy to report more spectators on the embankment opposite the main straight, good to see despite the cold! Thanks.

This time around I am seriously waiting for the prize winning photo’s of the RacePics guys!

Gary Stacey promised a report of his race in his Mk1 Ford Cortina, will post as soon as I receive, 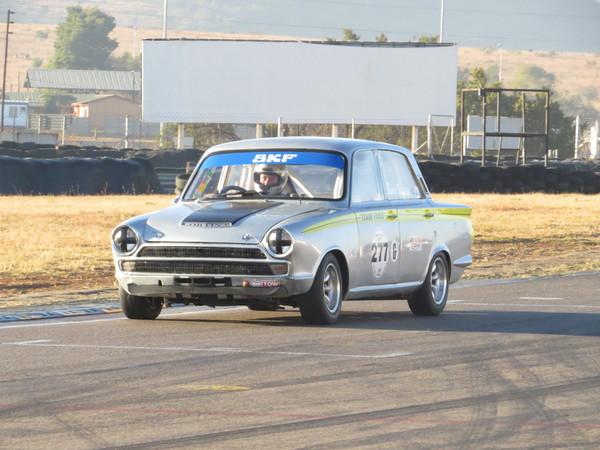 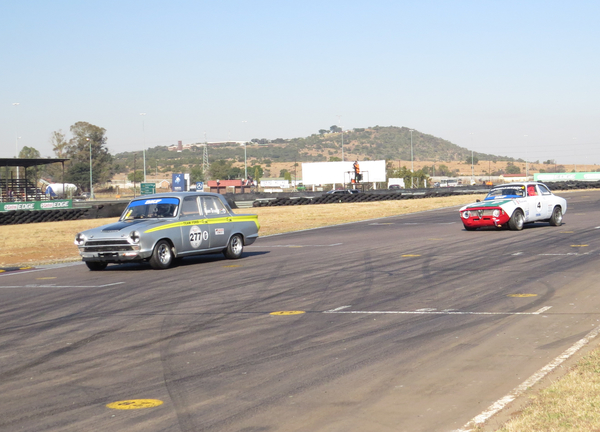