It is almost a week after our race, at times I still get adrenaline bursts …. The pic’s from the RacePics guys are out and serves as a reminder of the event. I see images that in the moment of racing, I was not even aware of. All pics in this post taken by RacePics.co.za 7 June 2014.

This motor racing thing. In my later high school years and mid eighties, racing a motor car on track was an aim. Never saw much in rallying, not that I do not admire those crazy people behind those windscreens, sometimes it simply does not make sense how they retain control in science rule bending situations. Strange enough some of the cars I desire most are rally cars like the Ford Escort rallied by Sarel and a RS2000 will fit nicely in our yard!

Money was always the reason used for not entering the racing world, justified, can not say, I never pursued the quest.

There are many varying fields of motor racing. Some cheaper, some hellish expensive and some an expensive initial cost. Let’s face it, have a crash or destroy the mechanicals, all fields will be expensive.

The Pre66 Little Giants is probably one of the most “affordable” fields, pending a few issues. In our scenario we purchased Fossa for ten thou and had on hand another twenty. We possibly added another five over and above that prior to our first race entry. 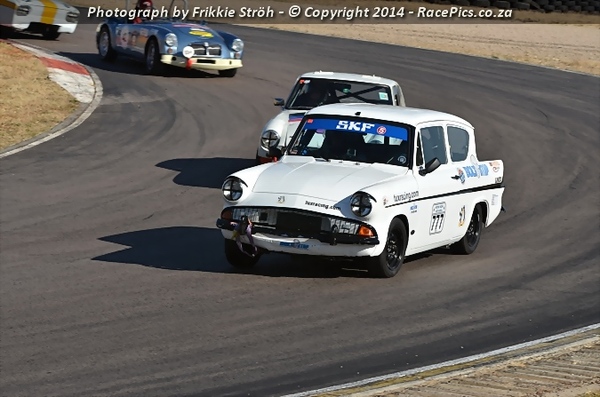 It depends entirely on your desired end results. The easiest and cheapest way in is for the adrenaline rush and PURE FUN. The Pre66 Little Giants have been created for this person with a future in intermediate and then of course also the extreme. You do not have to build a race winner. Everybody’s situation is different. Are you going to buy a project or do you or a family member have a suitable car just standing around. By the way, it makes for a good family project, as long as you can agree on the racing rights! The car’s condition is obviously going to have an effect on the completion price and time frame of completion. It helps if someone in the project is mechanically minded and creative with some skill sets as this will enable large parts of the project, if not all, to be done in-house. Available time also has an effect. With Fossa we spent every weekend and quite often evenings after work up to about nine o’clock so as not to annoy the neighbours too much. If you have friendly neighbours, maybe they will join in, who knows, every willing hand ……

Most of the time your racing endeavors are going to be a running expense, sometimes less, sometimes more. Having a “slow” and reliable car can be a blessing! It can always be fun, even repairing an engine, gearbox, diff …… It depends on you. Pending how hooked you are, you may spend money and work overtime to complete your car in time for a next race, in that case – DO NOT FEEL ALONE!

By all means, hang around the pits before making your decision. Gather information. Make friends. It is not on record that any of our competitors or pit crews have ever bitten anyone. In some cases we may be busy doing repairs or adjustments prior to an outing and our minds may be in the “ZONE”. The drug is adrenaline.

The tuxracing team started by being spectators. Racing ourselves, completely out of mind and “out of reach”. Then the photography to the best of our ability. Soon we started making contacts via Facebook, then contacts of those contacts ….. and the spiral started.

On your journey you have access to many advisors. Sometimes conflicting, then it is up to you to make decisions. We have found do research, research and research. When that is done often you have to do research! Google and Youtube often come to the rescue. Never with anything assume! It will cost you reliability and / or seconds per lap. 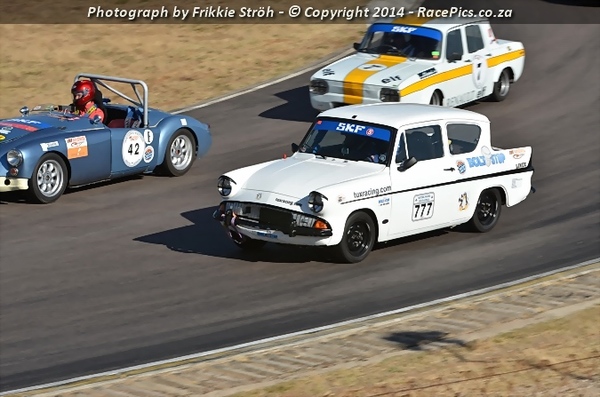 During our most recent race we managed to lap John Martin in his DKW. In our first race, John was our competition with his Deek. John said we will improve and run away from him, in my mind that really seemed mission impossible. Our growth has been slow, but sure. For a year and a half, we “raced” all by ourselves. After a few breakthroughs in skills, on and off track, we caught up with the MGB and now it seems we may be able to play with a MGA as well. Then there is newcomer, Greg ter Wolbreek in his Renault R10. In only his second race meet, the biggest improved car and driver in our “segment” closing up on us very quickly!

The tracks: These facilities require maintenance, that comes at a cost of finances and a labour force. Zwartkops Raceway is our second home. A nice balance of speed and technical. The best suited track to Fossa’s current setup. The track and other facilities are exceptional compared to the previous great Kyalami Grand Prix circuit and Midvaal Raceway. The track surface at Kyalami is in good condition, the bad news is that this once world famous track is coming up for auction in July …… which way will it go.

The other people. The administrators. The people behind the scenes, doing the planning, documentation, registering entries, raceday  …

The scrutineers. These guys know what they are looking at and are your friends, they will be the first in line to your, your fellow competitors and spectators safety with reference to your car. They will also very soon know the chancers! Beware.

The marshals. Having to monitor all the action for possible future misadventure! And then cleaning up after such! Much appreciated work done by them, but then they have some of the best spectating spots! This is another area where you can participate. Become a marshal!

They often hide behind armco barriers, like speed cops. The photographers. Many of our pics used on our website are taken by the team. And then a big BUT, we can also not wait for the release of the photographers trained eyes pics. Other than just a captured moment in your life, looking at these in detail often lead to future car setup idea’s. The leaders in this field, the guys from RacePics.co.za with a good collection after every event.

Then the spectators. These are supporters and photographers. The first to acknowledge a good race with greetings and applause! Unfortunately, these numbers vary greatly. I was surprised at the good support at the last race despite the teeth of winter biting into bone. I know the show is good at vary reasonable gate pricing. Next time, please bring some friends, 😉