Our “season” has started with an outing to the Piston Ring Club today. The weather did not quite play ball being overcast and with the occasional light to medium rainfall. Despite this the members of the Ford Cortina Fun Club turned up in their numbers.

A slightly nervous outing as I am still getting used to this trailer. Loading Fossa went without a hitch, no pun. We decided to take Fossa off the trailer at the Piston Ring Club so that she can be parked next to her Ford Cortina sister and get a bit more exposure. Not so clever though, we fail to remove the bolt assembly that allows the breakneck trailer to break neck! I reverse Fossa down. At the moment her rear wheels touch ground she touches her chassis onto the trailer which has not tilted back. The soil under Fossa’s wheels does not allow for traction, we can not drive her back up, we can not drive her down. Geore and the guys from The Ford Cortina Fun Club helped resolve the issue by assisting getting Fossa back onto her trailer. Thanks guys!

We received plenty visitors, often asked for event flyers of which we were freshly out ……. Michelle and Lionel popped in for a visit. 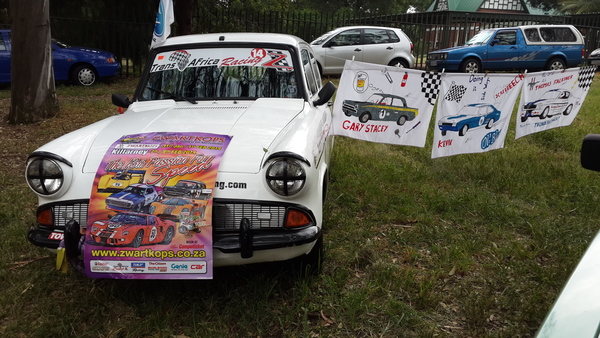 Coming weekend we have HTP’s on Saturday and Legends Club prize giving on Sunday. On Saturday there is “open practice” at R380 for four hours track time or Super Trax day on the Sunday for R430 starting at 10h00 as per the Zwartkops Events. We have the prize giving at 12h00 …..

A rock and a hard place …… We would really like to get to the track and run Fossa, in fact we have withdrawal symptoms. I have no idea how Fossa is going to behave with her new diff ratio and narrower tyres! Will it be slip and slide on the corners …. Testing. Do we tow Fossa on Saturday for four hours at the price or on Sunday for that price. Sunday we will be very happy to get two stints slotted ….. Funds are simply not that abundant ….

We realise that the sport as many other is expensive. AND we are exceptionally grateful for the opportunities given. This is still like a post teenage dream come true for me.

I can see the first testing of Fossa will be on the 31st of January which leaves no time for any changes. Exciting, nerve wrecking, choose one. The metro police will not approve of testing on the neighbourhood streets ….. and frankly it is not safe.

We have received a provisional program for the events.

The three of us all have leave approved for the Friday and Shane Venter will be joining us on both days.  Then we also have the support of the Ford Cortina Fun Club on Saturday. Can we beat our previous best of 17 known supporters on one day?