We purchased and collected Fossa, our Ford Anglia on the 5th of February 2012 with a goal in mind 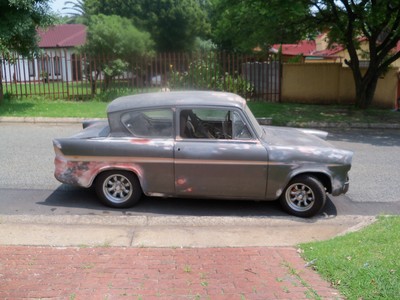 Only five months later we have reached the first part of that goal. Fossa had her debut race on the 21st of July during the Midas Historic racing event. 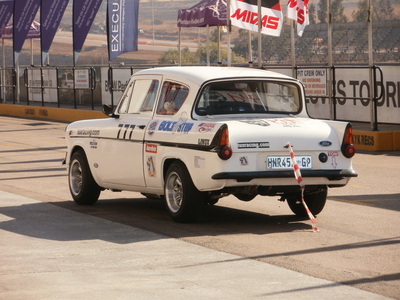 On Friday, 20 July we had Fossa at the track by 06:30. We had to wait a while to have Fossa’s Historical Technical Passport and event scrutineering done and missed out on our scheduled practice spot. We were however allowed to join another group and I did four laps after which I returned to the pits with smoking rear brakes. We completed some repairs and after a short test in the pits headed home at 17:30.

Saturday morning we are trackside before 06:00 and start prepping. Our qualifying is at 07:00. 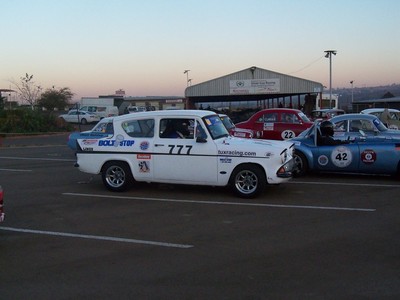 During qualifying we achieved a time of 01:44:645. My best on the track to date. This time was also never improved on during the following two heats. It is clear that my lack of experience, track time and drive time in Fossa is going to guarantee me a spot somewhere in the back of the pack, but I have made peace with that before the race.

Heat one: On the first lap, exiting corner three, Fossa’s left rear wheel feels as if it wants to fold in underneath her. Lap two I experience similar movements from the left rear. Suspecting rear brake lock-up I decide to just take it easy and finish the heat.

Heat two: A few of the entries did not finish the first heat due to technical problems. We are not lined up as in the first heat. I discover with horror I do not know what to do as suddenly there are more cars behind me than in the first heat. To not end facing the COC I let them pass, but then the car finishing behind me in heat one, a 750cc DKW follows their train and also passes. The start line comes up and the race is on. I do not have to much apply to much effort to retain my second last position, but then the dice is on. I am a newbie and do not yet corner as the more seasoned drivers. And in the back of my head I have that reminder of corner three in the first heat. Corner three is a right hander same as most of the corners on Zwartkops Raceway. My main target to finish the race, that would be my success for the the first day. 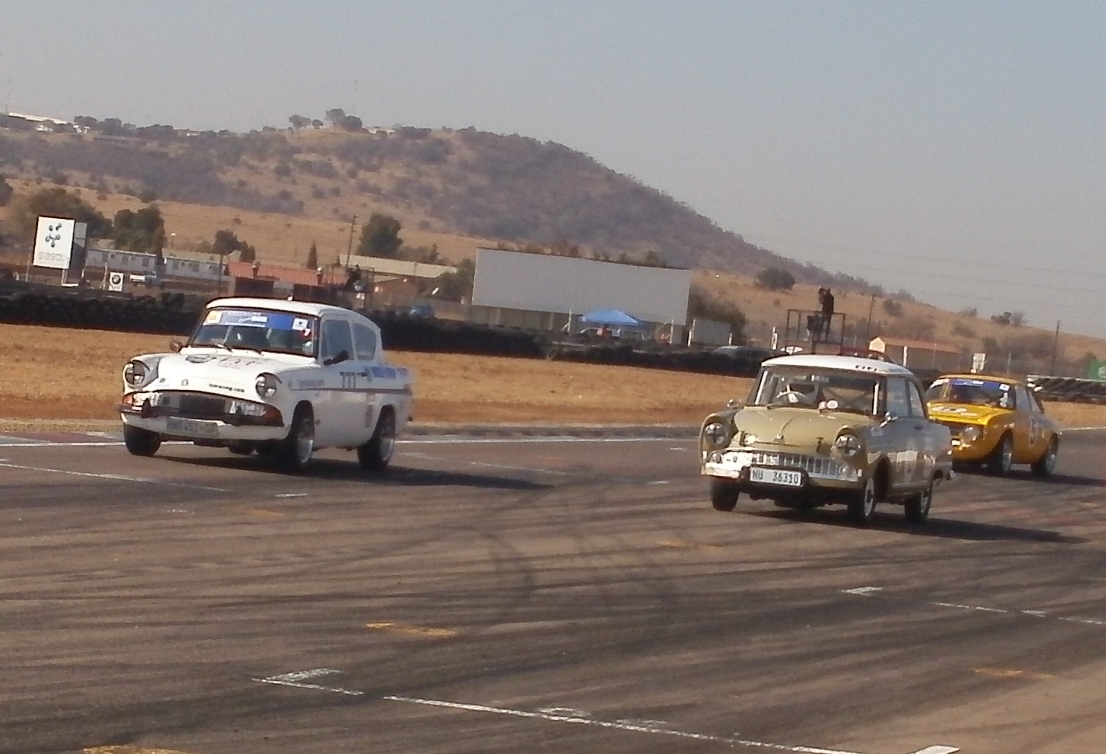 Fossa and the DKW

At least that was the plan. Now I have a DKW on my tail. I slow down like crazy for the corners and drive the engine as hard as I can in the straights. As I reach the corners the DKW fills my rear view mirror. I cruise through the corners and pull out as fast as I can. I accommodate the faster cars as they pull up behind me and then pass. On occasion the DKW tries his luck as well. I try to make enough space between us so that I can safely navigate the corner and with the DKW on my tail pull away. This is how it goes throughout the race with one exception, corner two. I pull into corner two and I can clearly hear tires, I think I am overcooking it straighten to find a DKW appearing from the blind spot.

We cross the chequered flag. I do my normal slow down lap. The DKW creeps up behind me on corner five and pulls alongside. He is riding thumbs up. We pull into park ferme. He is smiling, his first race where the DKW had overtaken another car. Also my first time overtaking, him. I say we have to get Fossa’s straight line speed up but he disagrees. This was fun. I do however trust we can push up Fossa’s speed keeping the engines reliability.

She was driven “EXTREMELY” hard throughout gears two and three. Not a sign of oil or water leaking. Not bad for an engine that has only seen new spark plugs, oil and oil filter since we collected her 5 months ago.

What we need to do: 1.) Narrower rims with improved off set, 2:) Stiffen and return rear suspension to original position. 3:) Stiffen front suspension. 4:) Check and adjust valve clearances. 5:) Replace spark plugs with a hotter grade. 6:) Replace exhaust branch and improve on system. 6:) See if we can source a lighter flywheel and fit a lighter pressure plate. 7:) Improve rear brakes.

We have promises of a sponsor, nothing on paper yet, lets see what materializes!

We arrived at Zwartkops Raceway at about 06h30. Our first attempt with our home built a-frame. It was cold, very, very cold. I am sure the light breeze was clocking below zero. 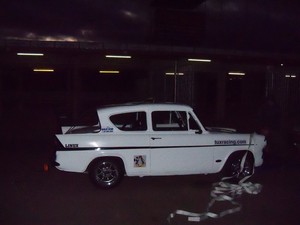 We found ourselves a pit spot. 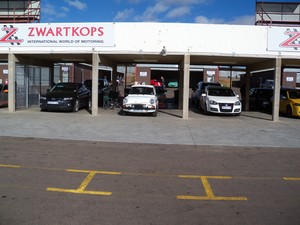 After about an hour more cars started arriving, eventually almost filling the front pits to capacity. 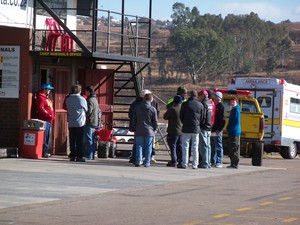 At about 09h30 all the N00Bs were hailed to meet. We were instructed to follow a Mini Cooper which would show us the race lines. We were told he was going to go around slow. If only I was in our V6 this could have been fun. Prior to the day we have only done an estimated 80Km in Fossa. I do not know Fossa at all. 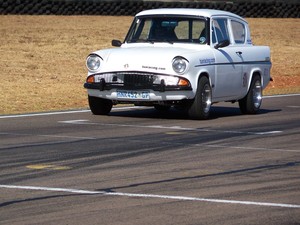 After our four laps all drivers of the day was called and informed of the rules of the day. We were also advised of a maximum noise level of 93 db and told that two cars are going to be monitored. After the meeting I asked if Fossa was one of the “hot” cars. This was a “Yes”. Luckily that was the last of music and Fossa enjoyed herself. 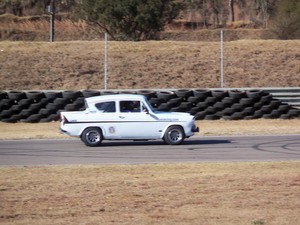 A beautiful site and sound

I “collected” myself an instructor, Fanie De Bruyn, and he showed my Fossa as it would take me months to discover. 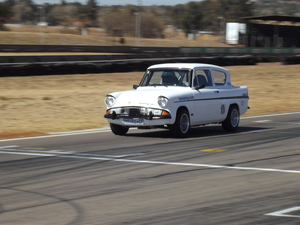 One of the rules of the day was that no timing was allowed. We were however able to determine approximate lap times by timing video’s taken on the day. On the recorded runs I ran a 1:47, about 7 seconds slower than the recorded lap we have of Fanie. Fossa is not the fastest yet. but we will get there. 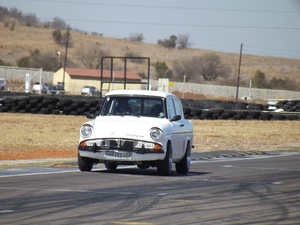 We have the go ahead at least for her first event to run on our current alloys! Friday, 20 July, practise and Saturday, 21 July her first big day! 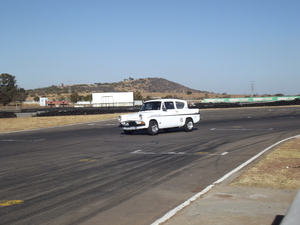 Still need to get used to her cornering, will get there!

We plan to take Fossa on the race track for the first time on Sunday, 15 July in preparation of her and my first race on the 21st of July at THE MIDAS HISTORIC TOUR 2012 on the Zwartkops race track.

Still have a few things to do prior to “D” day. Have recently stripped and cleaned her gearbox. The actual plan was to fit a 2821e gearbox as that box has a syncro ring on the first gear, but shock, the extension housing is longer than the standard box and will require a shorter propshaft. We will eventually do the change, it is however too short a period prior to our planned testing and race.

Butterflies, yes. Trust it will transfer into energy, reflexes and all that is needed on the track!

I have faith in the most of Fossa, at this stage the true status of her engine is not really known. It does sound extremely healthy. Time will tell!