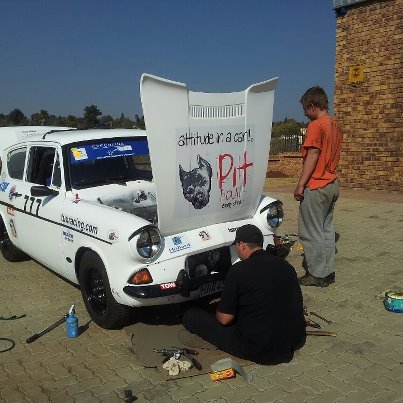 Day started early as is usual for the team arriving at Zwartkops Raceway, 06h30. Thankfully it was not as cold as our previous visit with the sun rising a little earlier.

Our aim for the day, to get as much track time as possible. And our meeting with Thomas Falkiner. Chris was just as exited as he was going to ride shotgun for a few stints. And I was as nervous as _______ again, not knowing how the work done was going to affect Fossa.

So our first opportunity arrive and we seated snug as a bugs take to the track. After two “hot” laps we return to the pits for our own initial inspection. Fossa’s brakes show signs of heat but nothing close to what we experienced during our first race days. 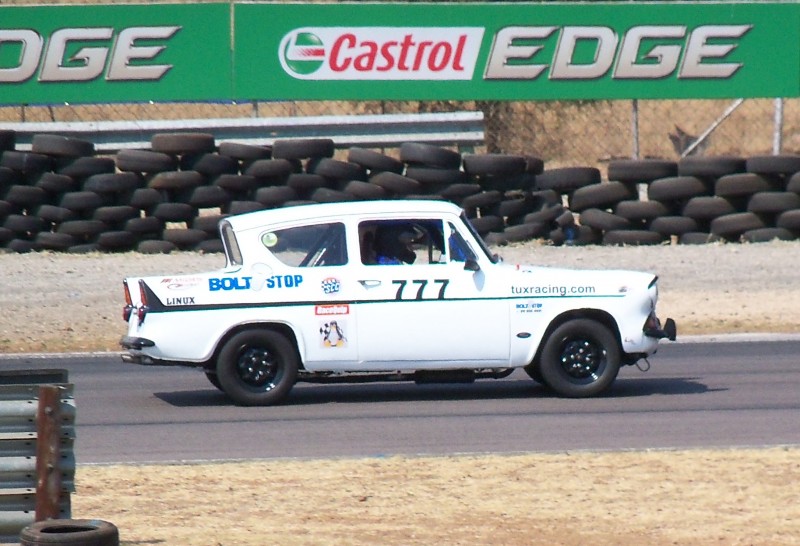 Fossa Ford Anglia in action on her steel rims

Our next “heat” I am accompanied by Thomas Falkiner. Do not know who was the most nervous. After one lap Thomas starts advising me on braking points, gear selection and racing lines. We bring home a best time of 1:41.19. Quite an improvement over our previous best of 1:46.17. Maximum speed achieved on the day 115Km/h. I do not believe that is the best we can get from a 1600 Kent looking at power to weight ratio.

We do another three “stints” with Chris joining every time. Think he had the time of his life judging by the look on his face. On our last stint Fossa retires with a broken fuel pump.

Our next outing 1 September at Midvaal Raceway. See you there!

So many questions, doubts, enough to guarantee a headache.

So many options. Do you find and build or prepare your own car. Do you have someone else do it for you. That is where that thing called money comes in. And if you want / trust someone else to prepare the car you will be racing.

We decided to prepare our own car. Beside it being a great deal cheaper, it still is not cheap by our standards. Speaking if standards, I was trained and employed as a metrology engineer for about ten years a few decades ago. To the annoyance of some I have been applying the skills and dedication to accuracy in most “projects” I have had a hand in. The same applies to Fossa Ford Anglia where possible. We have a good idea of how much it cost to get Fossa to where she is now in hardware, spares, etc. If we were to add labour time in a monetary value, Fossa is an incredibly expensive of piece of motor car!

Racing is not that easy IF you are a law abiding citizen stopping at stop streets etc. In my late teen and twenties it was nothing for me to run cars at their absolute maximum, sometimes not even fully roadworthy, doing “dangerous” acts. There was nothing I could not do with or to a car. Running 200km/h on retreads, turning a car to face the opposite direction while still moving 180km/h in the initial direction. Running my Ford Cortina down the center of a two way road at max watching the “tornadoes” forming behind on both sides of the road. I have done it.

On the race track I find myself switching on the indicators before taking a corner!

My split personality has to step in to take the corners without indicating.

We are only at race two. Entered, still splattering about to do improvements prior to the race. It does seem to be a full time of your available part time hobby. The cost of building / preparing, maintaining and entering a race car is certainly sinking in. Often a change is two steps forward one back, maybe even two …… We have come a long way on our own resources.

We have a truly dedicated helper in the form of Bolt Stop. It is so enlightening to go in there and experience their TRUE INTEREST in our progress. Our gratefulness unmeasurable.

Our other “sponsor” Pitbull energy drinks, show zero interest. At this stage it is a one way street which in a way I can understand as they are a new face in a very competitive market in South Africa, but I do not accept the absolute lack of interest. They have the option of using the racing car pictures in their campaigns, no such action. Worse, various promises have been made which are not being adhered to. The question, in the face of the cost of motor racing, how long do I keep their running advertisement running.

Considering we have had other sponsorship offers ……

As I said headaches ….. Challenges Galore …….

Almost two weeks ago, Fossa completed her first race. Here are some pictures taken by RacePics.co.za.

Fossa Ford Anglia through the lens of RacePics.co.za /1

Fossa Ford Anglia through the lens of RacePics.co.za /2

Fossa Ford Anglia through the lens of RacePics.co.za /3

Fossa Ford Anglia through the lens of RacePics.co.za /4

Fossa Ford Anglia through the lens of RacePics.co.za /5

Fossa Ford Anglia through the lens of RacePics.co.za /6