The “silence” on the web site does not mean nothing is happening. Been under the “flu” and progress have been slow but steady.

Some “Top Secret” improvements have been made with the “Mystery Object” from Denzil Bhana in Zimbabwe, fitted. A quick lap around the block proved quite interesting producing some drifting that required a touch of counter steer. Being in a residential area I could not test to the limits and that is ultimately what is needed on track. More to be revealed after real testing. I am probably optimistic in some degree, but I think we could cut another four seconds on the short track, hello Zwartkops!

Yesterday we completed our home made gauge face plate and populated it with brand new gauges. Should help in monitoring Fossa’s vitals as they are now in easier view. The Kia radiator have been removed and the larger old fashioned copper radiator fitted. 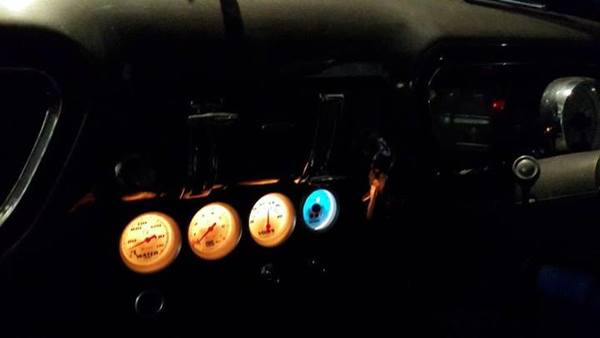 Since we started the project we have received so many “gifts”. Some physical and some in the form of advise. And every one at the time that was “the right time” for it. When we just started, we had the challenge of getting narrower rims and with a event limit placed on us, we received a set of rims from the Ford Escort Club at “The Cars In The Park, Pretoria, 2012”. Proper preparation and we are still on those rims. Recently the distributor from the Locust guys via Gerdus Smit and now the “mystery object” from Denzil Bhana. To put a value to these gifts, very difficult and not within our budget.

And then we decided to attend Piston Ring Club. It will also give us our second opportunity to go through the motions with our trailer. Being busy on Fossa till quite late Saturday, we only washed the cars this morning. Mistake? We could not go with dirty cars. Arriving at the meet quite late, the place was packed. No room for a mouse, not to mention a Fossa or a Cortina! Going in, heading to the normal placing of the Ford Cortina Club SA …….. slowly, a lot of people, slowly …… to find they have assigned that entire area to “flea market” stalls. There we were, at a dead end. Basically, with the complaining of a stall owner of blocking the view to her stall at what I understood to be primarily an event for “Car Display”, waiting for an opening to swing the Cortina and Fossa on trailer around to high tail it out of there!