Annalie and I head down to Oslo Beach the afternoon of the eighth. We reach our primary target, the Shelley Beach NSRI station at about 19h30 with our 4.0 Ford Ranger proving up to the task, though rather thirsty. Thursday morning we head to Dezzi Raceway to drop Fossa Ford Anglia off and then head to our family “down under’s” home for a visit. Then book in at our accommodation in Oslo beach and a short visit to the Indian Ocean beach. A shower, something to eat and a welcome bed.

Friday morning we head to a wettish Dezzi Raceway, do the documentation and scrutineering thing. In the weeks leading up to the event I study our own video footage, a drawing and the Google earth image. I do my best to look at every corner, every possible marker trusting that some of them will still be there. Fossa’s Kent engine sounds mean and I want to improve our previous best lap time with Fossa. We run three practice sessions with varying wet to drying conditions. Not ideal for a heat cycle on her new semi-slicks. Something on Fossa’s suspension / steering does not quite feel right. 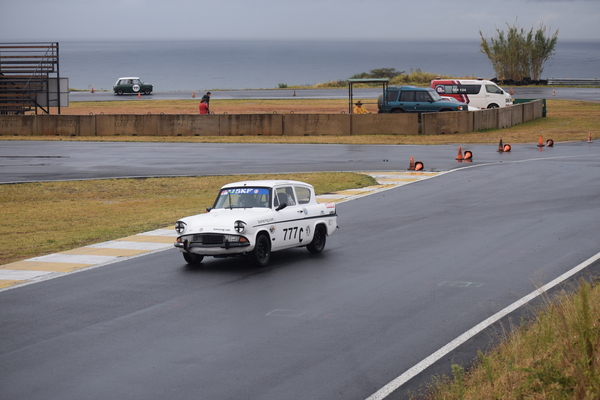 Saturday morning, 11 August, we are at a cold dry trackside with my brother Jacques as pitcrew at six bells. Final preperations, tire pressures adjusted, wheel nuts torqued, oil level confirmed, fuel touched up ….. It is time for qualifying. Fossa’s tires moan much to easy. Clive Winterstein is here with his Porsche 356 and we will somebody to race.

Lap 1: We are released, Les in his MG has a slow pull away with Fossa and Clive’s Porsche cluttering into turn one. Into corner two Clive is on my left side, corner three and then there is some separation as Fossa goes out front. The whole time I have the Porsche breathing down my neck. 2:05.520 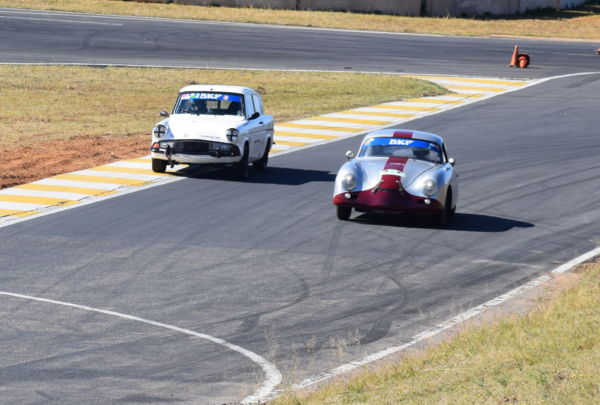 Lap 2: Corner one, Clive pass and pulls ahead. Into two Fossa squeezes through and once again takes the lead. The track has quite a few what I would probably call compound corners, in what could possibly be said to be corner six, I notice Clive’s interesting line running wide. In all my “studying” this corner was one of my biggest challenges as it had me in second gear last year, running the corner wide makes third gear a reasonable option. I still catch a glimpse of Les in his MG out front every now and then. 1:42.298 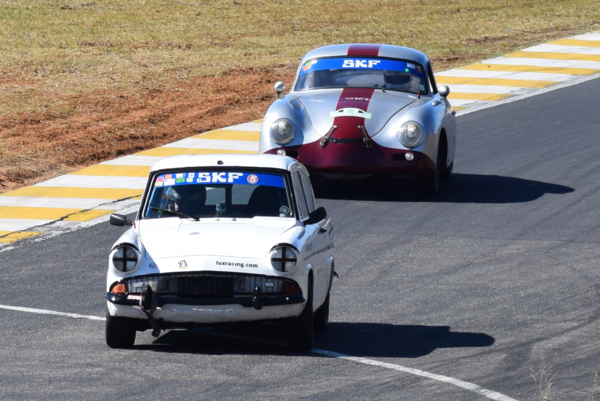 Lap 8: 1:46.090. The way that some of the faster cars pass Fossa in the corners having us run off the track to avoid contact I can only accept that they do not like racing with the slower cars. Even when in a close race like this one I always race to accommodate them, even slowing down a touch to enable a hassle free pass and I would show them to pass giving extra space at the cost of our lap time when and where possible. Let’s face it, I love racing Fossa, it’s like racing your family sedan, if I had the finances I would be racing the best car ever made, a ’60’s Ford Mustang. Give enough rope, one day is one day …. will not be a laugh, but justified.

As I head through the primary pits Fossa starts spluttering, down the hill to ours, suddenly the cabin starts smelling of wires burning, then the smoke. I can only try to go through the narrow pit road and that with an oncoming marshal towing a recovered car, a spectator on a large bike has to stop in front of me, and wheel his bike reversing into a “parking” spot. Fossa dies, I get her to start again, the air inside unbreathable, I am waiting for the flames, I have to kill all the electrics. The marshal in the passing vehicle assists with a fire extinguisher. And we are blocking the incoming race cars.

Fossa is almost as white inside as outside. Jacques and myself attack the wiring issue finding and replacing damaged cables. Annalie does many trips uphill, um yes, to fetch pails of water, an attempt to remove the powder …. Eventually Fossa starts up, she is not as perky as she was, can only suspect the the battery may have suffered, every now and then her dash lights flicker …. Just in time ..

Race 2: As we head around the short circuit for positioning it is immediately clear that we did not find all the powder. The air moving around inside Fossa just release more and more powder. I discover my helmet visor lens rather scratched, the powder tastes awful and has an eye burning effect and Fossa is running as if she has a miss and she feels very loose …. After four laps I call it quits, no chance of challenging Clive and Fossa’s handling rather dangerous. Our best lap a 1:46.716

With Fossa’s bodywork in one piece and mechanics mostly working, she is able to drive onto her trailer which is first prize. Annalie and me spend Sunday on the beach, no whales captured on camera but a “school” of dolphins that took more than a half an hour to pass.

Back home. Fossa’s seats are removed followed by all other removable items. She is high pressure washed inside. Whether I got to all that powder … I have found the reason to her engine miss firing rather annoyed at the reason and the quick fix. With a wiring harness on route from the USA via a local supplier, next complete engine tests and an inspection of her oil .. An under side inspection shows nothing broken on any suspension or steering components. Will have to take her for wheel alignment maybe that results will point us in the right direction ..

On the 13th of October “Ford and Friends” will be visiting Dezzi Raceway. That could have been an awesome experience, Taking leave again and the financing putting it out of reach.

Dezzi Raceway is a track that seem hard on cars with quite a few running into the KZN veld, even one VW attempting the track on it’s roof. As per the latest news, the Historic Tour do not have an event on the calendar at Dezzi Raceway for 2019. Maybe, just maybe we will be included in an Extreme Festival. I have some unfinished business at Dezzi Raceway, I feel we can cut another three to four seconds …… and just how long we will be able to continue racing is unknown. Will also look at the Retro Racing calendar and negotiate joining them for a race 😉

In the meantime MSA and Redstar Raceway seem to have made peace or come to some sort of agreement and the Historic Tour will be returning there next year.