It’s the time of the five year anniversaries …..

Firstly, our latest event. Past Friday 16 June we attended the Extreme Festival at Zwartkops Raceway. For this event we are to run with the Under Two Liters. Leading up to the day I get an itch, scratch, scratch, that infection that makes you fit the side draft DCOE40 Webers with a different configuration …. A crazy move, maybe. Fossa is prepped with the last in a series of three TOTAL oils being tested, this time, TOTAL QUARTZ RACING 9000 10w 60.

Team manager Annalie and me take leave and have Fossa trackside 15 June. It is the first time Fossa is towed using something other than our loyal Ford Cortina. We test the company vehicle, a Toyota Hilux and immediately face flack on arrival ….. Do the documentation, scrutineering and a practice event is about to happen. The other cars are already heading down when I in record time get prepared and follow. The side draughts really chatter wildly and give us a 01:27.316. A legendary BCET from Aces Cafe and we head home. 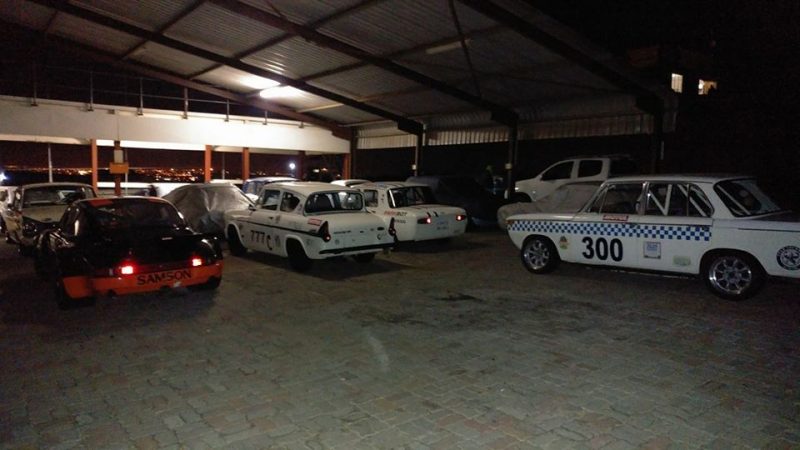 Race one starts at 11h30. For us it is a bit of a lonesome affair. Just can’t seem to find that sweet spot. The Thursday lap time in my mind and knowing that is not the limit … On what would have been my second last lap the Under Two liters come past and our race end with a best lap time of 01:28.134. 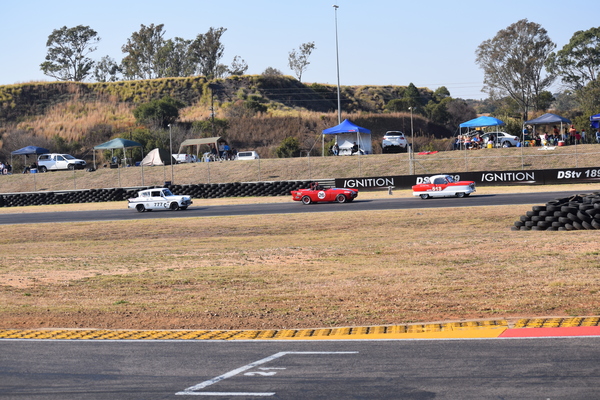 Race two sometime after 14h30. A total opposite of race one. Still getting the feel for the sidedrafts, Chad Ten Doeschate (Nash Metropolitan) and Mark Van Rooyen (Sunbeam Alpine) are ahead challenging each other for class C honors. I find Fossa delivering the best shifting early, probably due to the 28mm choke tubes. 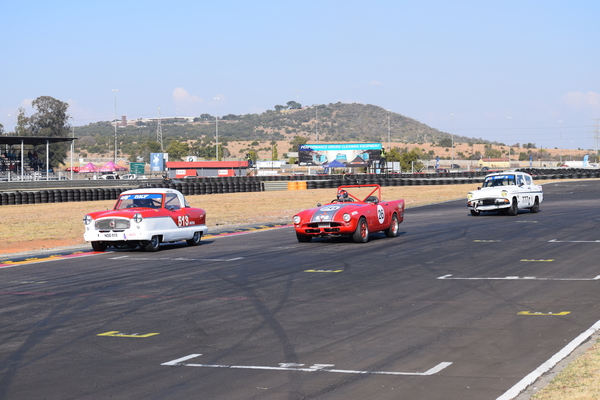 I manage to catch up and follow the action close up. It is then that it crosses my mind, did I or didn’t I start the recording on the GoPro, oh well, I press the button and hope for the best, then it is back to the action. Every now and then it looks like a stream of liquid smoke coming from the Sunbeam as his tyres touch bodywork in the corners. Both cars hop and bounce around making it difficult to plan a move. Mark manages to pass Chad and for a while they run side by side. Chad manages to brake free on corner three as if Mark missed a gear and we pass Mark. In the meantime the Under Two Liter cars are closing in.

Class C mixed with a variety of Under Two Liters ..

At corner five I consider passing Chad on the inside but that Nash boggels my mind and I let that slide, round corner six, seven and just before eight the leaders of the Under Two Liters start meshing through the contest of our class C group and lapped our race end a lap premature. More lessons learned.

Fossa has been checked and excluding a repair needed to her right rear shock mount, she is ready for her next run. Her TOTAL QUARTZ RACING 9000 10w 60 is exceptionally clean. Will wait for the test results, but I think this is the one I want to use, challenge though, it does not seem to be that available.

Five years of every emotion imaginable.

Some stats: In the five years,

Events: Fossa attended events at race tracks 44 times. 26 Race days, 15 track days, 1 Lotus register day, 1 marshal’s training day and 1 raceday only to provide a suicide ride. Of these 34 events was at Zwartkops Raceway, 7 at Kyalami, 2 at Midvaal and 1 at Redstar raceway.

Engines: Five engine blocks have done duty of which one was completely destroyed by pushing a conrod through, one an experimental and one a secondhand one race attempt. Two cylinder heads have been destroyed by valves breaking.

Carburettors: Fossa started her track career with a 36DCD for her first nine events. That was followed by twenty five events with a 38 DGAS and then two events with 40 DCOE’s. Seven recent events was completed with a newly acquired 36DCD. And then our last event back to 40 DCOE’s.

Gearbox: Fossa is still on her first original gearbox.

Differential: Fossa started of with a 3.777:1 and that completed 19 events. Her last twenty four events employed a 4.444:1 ratio with a Quaife LSD.

Tires: Fossa have done seven events on road tires which still have about fifty percent life, 32 events on her first set of Yokohama semi slicks, four events on a set of Dunlop semi’s and currently going on to event seventeen on her second set of Yokohama’s with the next set of Yoki’s waiting.

Trophies: In her 44 events to date Fossa have collected 19 trophies of which all are treasured. The biggest trophy is still to take Fossa home in one piece!

Lap times: With so few events at other tracks Zwartkops Raceway serves as our datum point for results. 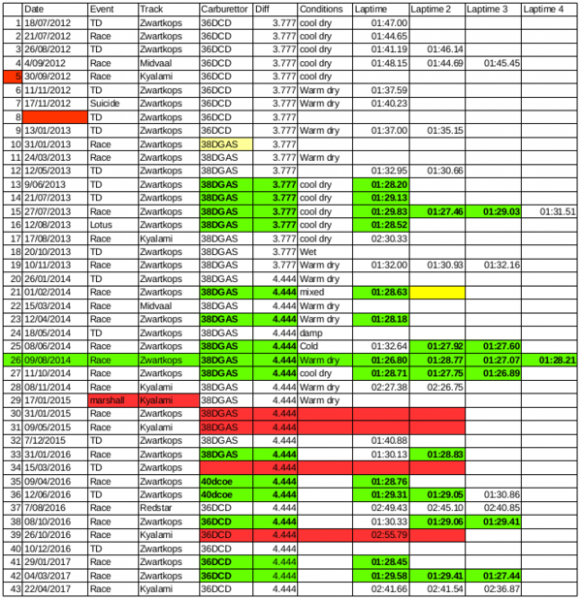 Next event, we will have to wait and see as we join the Historic Tour for the remainder of the year.

Until next time, cheers 😉