It has been a very unusual Saturday in the tuxracing team “headquarters”. We took Die Groen Bliksem for a stainless steel freeflow exhaust system and returned home to a very peaceful afternoon. We still have some items on our to do list, fit new brake pads and change oil and filter. After two attempts at getting a oil filter, no stock of Castrol Edge or the oil filter at our local Midas and only a fong kong filter and our Edge at R500 at another dealer, I will be acquiring the necessary tomorrow and complete preparations. 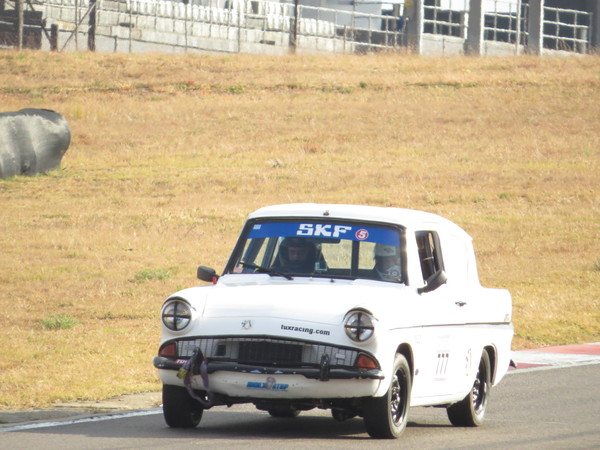 Fossa with Zwartkops Raceway winter grass in the background

This week our entry has been submitted and paid. Fossa will be on track! Some good lap times will be rather nice!

See you at the track!

Having to make some exhaust system repairs before testing I pop in to our local SupaQuick. Owner tells me to bring Fossa in on Saturday morning for a sponsored exhaust system. As they open their doors we are there. Four hours later I am told that the fitment has been approved in the absence of the owner ……. Simply could not wait any longer, things to do before Super Trax Day ……

06H18, We arrive at our second home. Off-loading, final checks done ……waiting for start time while trying to avoid hypothermia ….. It is cold and my shoes are slightly damp from the car washing the evening before ……

Our first stint arrives, on track, lap two, water drops on the windscreen, it is over cast, check the other drivers on track for change of driving style, …. none, slow down and pull into the pits. Opening Fossa’s bonnet reveals her waterpump so lose it is about to fall off! New scares, is there damage to this engine? And what damage? Refit her water pump, fill with water, run to hot. No apparent damage found. By now we have lost out on our second stint.

Third stint we go out, lap two, corner two, I apply a touch to much feel good pedal and we do a nice forward one hundred and eighty degree slide, colouring the track with four lines Dunlop Durezza black ending on the grass next to the track, engine idling. There does seem to be more power, I need to adapt.

We complete this and another stint without further serious adventure. Despite expectation after the work on the camshaft no super lap time ….. I also seem to have lost my way on the track, scary, could not run correct lines, braking points off …

And we discovered the engine mounts in the first stages of tearing. Think the science mind will find a solution, probably change the design so that we are not dependent on Anglia engine mounts.

It was still extreme fun and I have been told she has never sounded so good from the outside. We are at decision time again. Can I fix the engine mounts in time? Will we enter the next race scheduled for the seventh of June?

Will keep you informed ……

Firstly, we received our current points status and Gary Stacey are leading the 2014 Pre66 Little Giants and first in Class V in his Mk1 Ford Cortina two races in. With a second at Midvaal and a DNF at Zwartkops Raceway Fossa is trailing …….. but there are still a few races to the end of the season.

Then I take our trailer for roadworthy ……….. taken for a ride yet again! There is one thing that you as human have going for yourself and that is INTEGRITY. That is your worth. You do not have that your value to yourself and to the rest of us is nill. We now have a trailer which needs brakes with a run in hitch and the plate fixed ……… Annoyed?

On the Fossa front. We collected and installed with some challenges, Gary’s spare engine, filled with fresh oil, new oil filter, even started it. We were not able to run our 38DGAS on our short inlet manifold due to space required as per Gary’s wishes. New NGK spark plugs which has not even fired yet installed. They can stay there as my Ford’s run Champion spark plugs!

Some other factors also came into play. We are, strangely enough, as stated from the beginning not in this to win. We are primarily in this to have FUN. Despite the sometimes hard work, that is also part of the fun. By just fitting a super hot engine we are not playing by our own rules. Immaterial who did the preparation of that engine, someone else did it and free too us or not, Fossa is not a cheque book car. Everything on Fossa excluding her exhaust system and some machining which we do not have the machinery for yet, has been done on our premises and have been fun and by the way proudly landed us some trophies, a 2013 class win and second for Pre66 Legends Little Giants overall.

After some very frustrating days and the first time I lost my temper at the situation, we had a discussion in-house. Our options to run that engine just ran out, so to say. So post payday, that engine will be heading back to it’s home to stay a backup engine to Gary. Should we miss a race due do engine problems, so be it. It is called motor racing on salary sponsorship.

I will just have to call on my life skills again. Ten years of metrology keeping your cars on the road, airplanes in the sky, firepower for the then defense force to keep you safe in your homes ……… and … and …

Back to the drawing board. Prior to collecting Gary’s spare, we found that Fossa’s camshaft was trailing her crankshaft by 14°. With a protractor and a dial test indicator her cam was setup in the “correct” position and locked in place. It is then followed throughout its cycle and the opening and closing of valves verified against specifications. It all checks out peachy. The rest of the assembly on the engine went acceptable.

Fossa’s sump now has additional baffles to reduce oil flow away from her pick up and her pickup is now 5-6 mm from the bottom as researched.

THEN, we start to fit the engine, all goes reasonably smooth but for some reason the engine to gearbox gives some resistance. We want to do the final engine to gearbox bolts when I spot the reason for the resistance, the spacer plate between the engine and gearbox never crossed over the steering assy. The plate bent beyond recognition, we pull the engine, two hours from completion. A good eight hours later with the plate restored close to its former self the engine is fitted with only a start, head re-torque and bonnet fitment. Off course, my hands are carrying the marks and are as sore as something been attacked by a porcupine.

I have not changed anything else, as previously advised by Gary, “change only one thing at a time, that way you can see your progress”.  Or lack there-off. I would like to see what difference the camshaft position will make, radical I am dreaming. Have a silver BMW 700 to catch next. Can hardly wait to start her. She is resisting …… seems timing is everything!

A day later and with a battery fully charged with our newly acquired battery charger, distributor position verified ………..

Fossa gives a spit and a splutter here and a bang there and starts!

She sounds MEAN! Tonight is rest night, update the website and sleep, we have to for those salaries mentioned earlier!

Planning to go and do an on track run-in and test at the Zwartkops Raceway, Sunday, 18 May. Prior to that, we still have to resolve a gap in the exhaust system since the branch seem to have shrunk and check her brake system.

Until next time, cheers.