Another weekend of dedication and hard work, thanks boys for keeping our dream alive!!!!

Looking forward to a full and hard 2014 racing season. – What some people do for fun.

….. the doctors say the results of the operation will only be know after some testing. 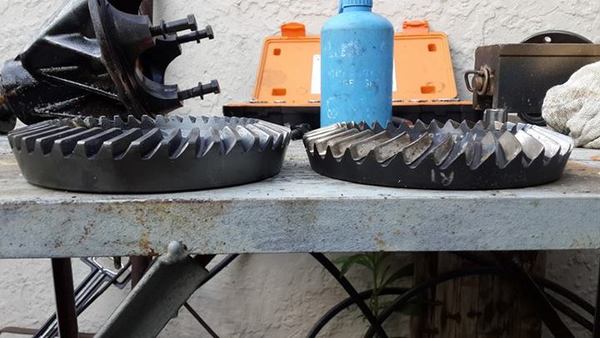 Differential ring gears. the one on the right clearly shows a LOT of wear

First test will probably be at Midvaal Raceway on the 7th or 8th of December pending their program.

Her differential ratio has changed however. Moving from a 3.777:1 to a 4.444:1 with a Quaife ATB LSD. She has not topped out at Zwartkops Raceway using the 3.777:1 and with her ratio being to high in third going through corner eight the change could well be an improvement. Topping out at Midvaal Raceway and Kyalami Grand Prix Circuit may come into play, we do however have limited races at these tracks. Will just have to use common sense in limiting her engine rpm.

In an attempt to reduce engine bay temperature we have wrapped her branch. Another time will tell effort.

Friday, 8 November. I have a days leave to take Fossa to Zwartkops Raceway as we qualify early on Saturday and off loading Fossa, documentation and scrutineering takes time. I complete the above and take Fossa on two stints. Could not find my groove, Go-not-so-Pro dead again, Racechrono problematic, only recording a sultry 1:33.29. Again something new, her gearbox starts singing! Have a close shave with a V8 under braking. And pack up and leave to go and pick up Annalie after her days work. 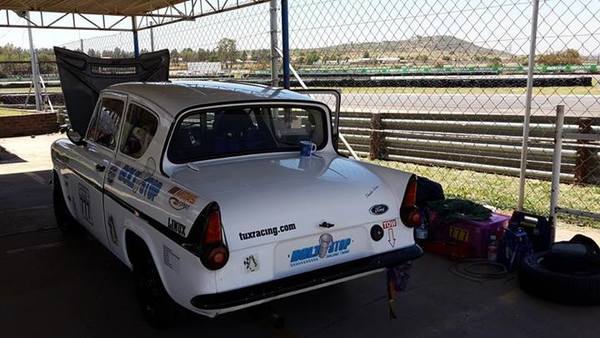 Saturday, 9 November. Leave home late, still arrive at 06:04. Final checks. Our competition for the 2013 class U crown standing a few feet away from Fossa. A nervous Gerdus pops in, he is also in a fight for annual position.
Lionel and Michelle arrive.
Qualifying, 07:30: The singing of the gearbox becoming quite loud. I achieve a best of 01:32.004 and get a starting position of 16th. 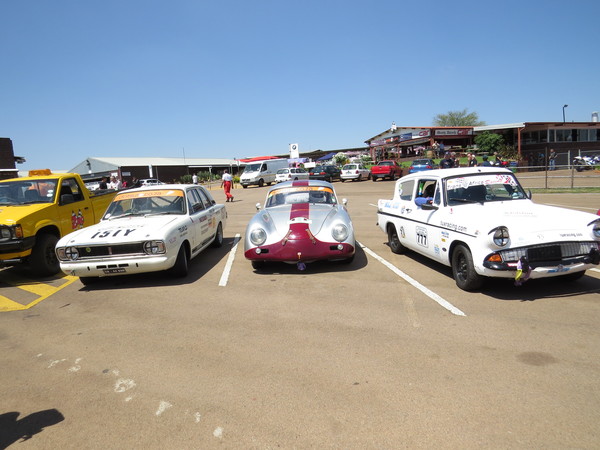 Left to right: Dugald McLeod – Mk2 Ford Cortina, our challenge to the 2013 class U championship, Clive Winterstein – Porsche 356A, our challenge for the day and on your right, the World Famous Fossa Ford Anglia!

Race 1: As usual a rolling start. The pace car keeps quite a speed and the back of the field cross the start line quite spaced out. Amazing what a second or two can do. Fossa’s gearbox sounds as if it is amplified. Unfortunately Dugald McLeod’s Cortina fails early leaving him out of the challenge. 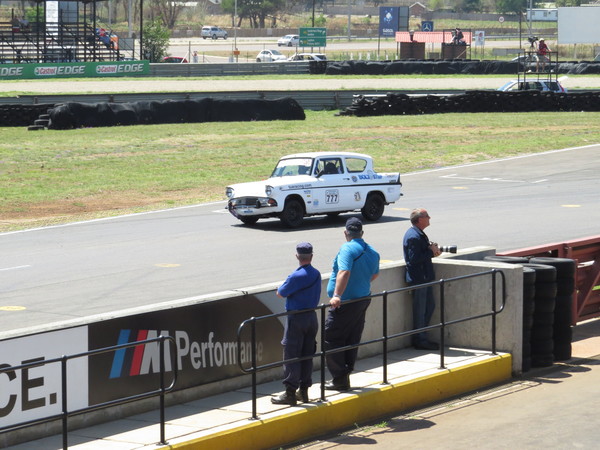 In the early stages of the race we have close relations with Clive Winterstein and then gradually build a slight gap to the end of the heat. Best lap time, 1:30.934.

Race 2: After the staggered start of race one I keep very close to the car leading me and the pace car is leading out a little slower resulting in a more bundled start. I think it is the first time I see the leading cars in the straight before their rapid departure. Suddenly just before corner two glass, glass and more glass. Something hit Marco Taylor’s Alfa Junior’s windscreen. Did not not know that a windscreen contain so much glass.  Fossa’s camshaft have her in her happy space between 4000 and 7500 rpm and her gear ratio spaced in such a way that second is too low for the final corner and three too high. Coming out of the final corner she takes a while to build some speed.  For a lap or so I retain position and THEN Clive Winterstein’s Porsche passes me. 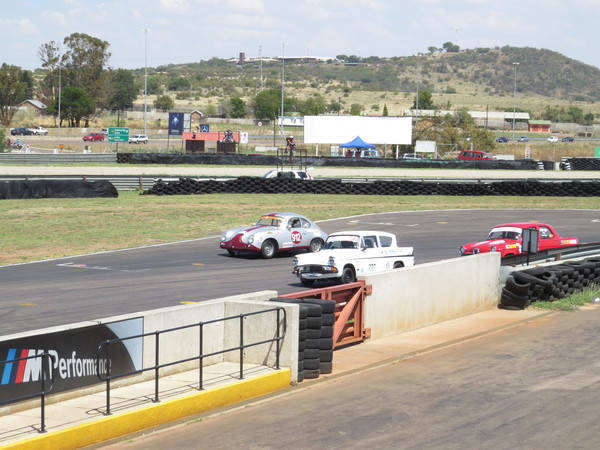 By now Fossa’s gearbox is singing so loud, from mild classic to some crazy opera on a sound comp winning system, I can no longer hear the engine. BUT the race is on and soon I do not hear either! 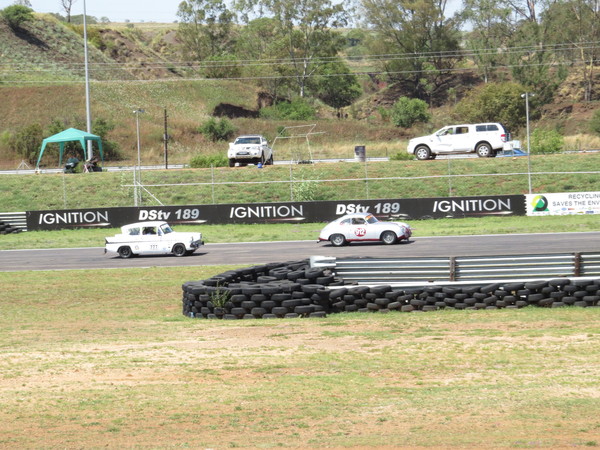 Chasing down the Porsche 356A

Look at the lap times as recorded by (Spreadsheet) TJ Timing. A gap created on final corner to shrink it down and virtually pull in next to the Porsche to let the Porsche through on the corners, lap after lap. Never before have I had seven laps disappear so quickly. What a race! 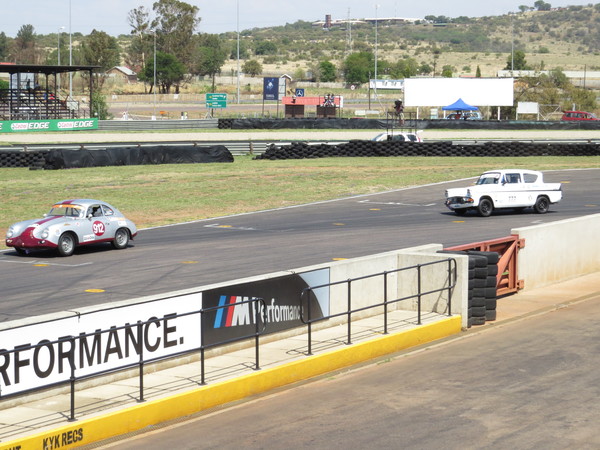 We finish the race in that order, no second given …. 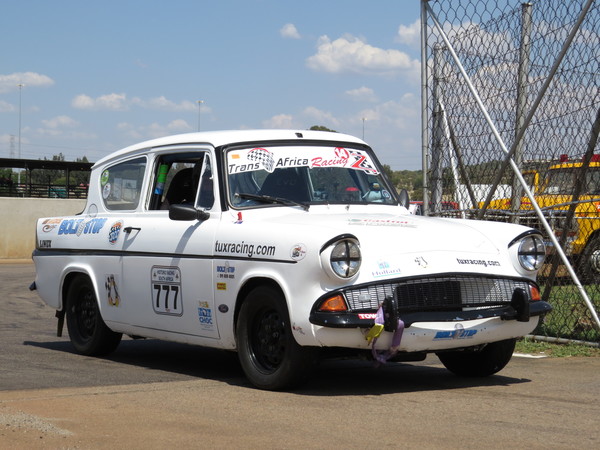 A boiling Fossa entering the pits

As per the points standing last received we should have the 2013 Little Giants Class U in the bag. A year of unexpected, unplanned, hard work, often expensive and a incredible amount of fun!

Today is resting day. The gearbox should see removal next weekend. A few questions to be answered, will we retain the 105e gearbox, bearing availability, move up to the Escort box, can we race the five speed in Legends …… time will tell. We would like to do a stint at a Midvaal Raceway track day before year end.
Greetings

Ps. Lifted Fossa and did a mid air run. That singing comes from her differential. Removed the diff to find the pinion and ring gears destroyed.