After a lot of telephone discussions we head to the wild, wild west ……

Gary offered his bullet proof spare engine for use in Fossa while we build our ultimate engine …… The work done on his spare motor is very evident and I can only imagine what we would be capable off …… And then a snag …… Our pressure plate is much smaller than the one used on Gary’s Cortina. Changing flywheel is not an option as, no1, the flywheel is lightened beyond what we have and, no2, the engine has been balanced.

Pity, but not a problem, we have learned a lot and already have almost all the spares to complete our interim engine, we are just awaiting our new HVHP oil pump from the UK. I have completed part of the rebuild and are extremely happy with the findings and progress. WAIT AND SEE! 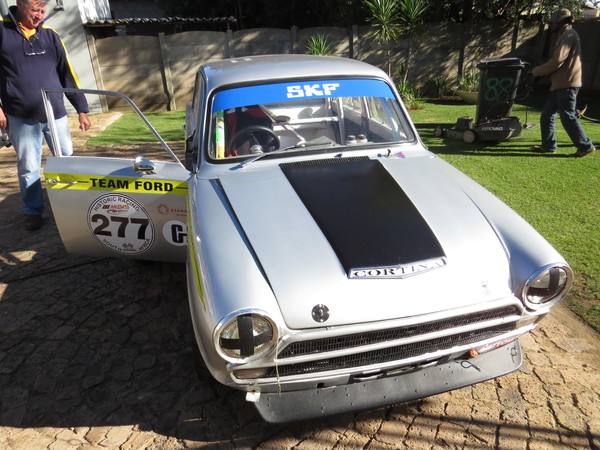 Gary’s mk1 Cortina has joined the Pre66 Legends Little Giants and now the tuxracing “group”, and Gary will be forwarding his own car information, progress and race reports. His Cortina will still sport the Coastal Tool Hire branding. Welcome Gary! This one of our ideals with the web site growing! 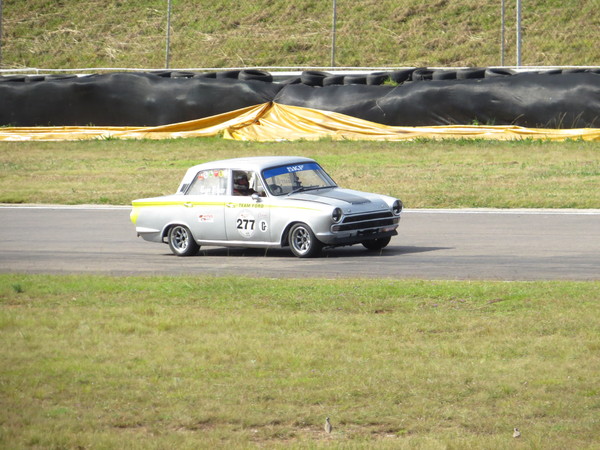 I had the honor of sitting in this car with the engine rumbling in it own language.

That not all, folks. Soon we will be spoilt with Gary’s other Cortina in his life, personally been waiting for this! 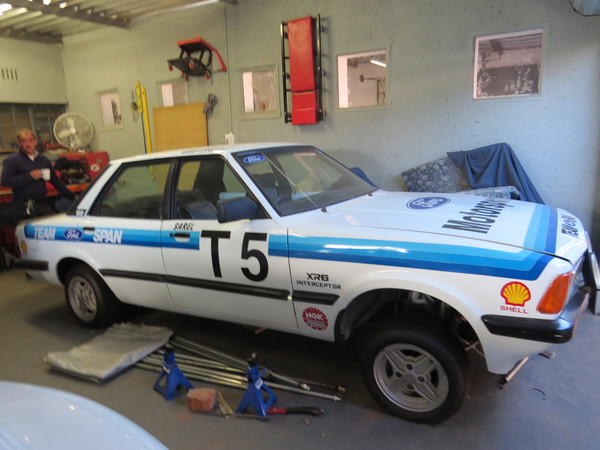 Till next time, cheers and SWEET DREAMS are made of this …….. !

Well, Fossa’s engine has been removed and stripped. 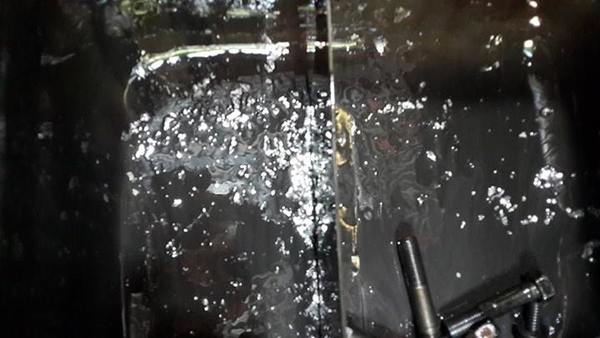 Well, what was different to our previous setup? When removing the sump after the valve broke and destroyed the cylinder head and piston, I found marks of the oil pickup on the bottom of the sump. The train of thought was, it is too close and could not draw oil from the entire pickup surface. With a bit of effort, the pickup pipe was bent to give a little more clearance. Probably not a bad decision ….. but, I suspect that in corners the available hot oil in the sump moved away from the pickup and left the pickup to suck air. Not cool.

The conclusion, other than going dry sump, either move the pickup back down to touch, or / and, add a horizontal taper baffle plate or two, to the existing vertical baffle plate. And, that’s not all folks, a high volume, high pressure pump being imported from the UK with the assistance of Barry Scott. Lets see how it goes!

Posting information on facebook can result in a lot of “help”. Sometimes help way out of your budget. Quite often conflicting. When the information is needed the conflicting can result in a headache, how to siphon the useful from the not current valid and the useless. I can write a book on all the info given and the relativity of the info with reference the challenge.

1. Recent comments with reference to Fossa running her big end bearings, advised to reduce piston and conrod weight, also to reduce rpms. Considering Fossa has been reliable with our “heavy” pistons and conrods since our spate with big end problems early last year, were is the connection. Fossa was also raced during her reliable period at 7500 – 8000 rpms. At our last two races Fossa was only capable of 6000 ……. This failure started on her rebuild after her valve broke off on 1 February ….

2. Then reference is made to Fossa burning too lean, that was resolved in May 2013.

3. It is then mentioned that we could be pre igniting due to ignition timing. When I advise that we are running 27° @ 5000rpm which is beyond Fossa’s maximum timing movement due to centrifugal and vacuum. Then I am advised I can run her at 34°. True, I am aware of this, the 27°decision is a safety margin.

4. I advise that we have ordered a high pressure, high volume oil pump from the UK. Then told in short it is used for higher clearance engines in racing. Track side, post the failure last weekend, I was told by three racers, to firstly get this pump. Somehow due to their being active in the sport with very good race results, I do tend to believe them.

We made the decision to use our recently acquired AX block in its current 40″ oversize form. Coming from the metrology field, I am often very critical and checked every water and oil way. I found the water way at the waterpump so blocked that I had to drill it out! That tells me one thing, over heating! After running the cylinder hone, a clear short vertical line. I have found a crack. That is the AX block out of the question for now.

Enough chatting, back to work, cheers

First the leading story, compressed version. Annalie and I decide to take a days leave on the Friday so that we can take Fossa to the track get the documentation sorted and scrutineering completed. And of course a lap or two to sus out her new front suspension configuration. Wednesday morning, the Groen Bliksem, our Ford Cortina’s thrust bearing disintegrates. Not a problem we source a clutch and after work we start gearbox removal. Removing the lever we find the nylon / plastic bush destroyed. And as I remove the clutch pressure plate configuration, the remainder of the spigot bearing falls on my chest. Not carrying that kind of spares and it being midnight we call it a morning. Thursday afternoon my heavy, Piet, (swaer) tows the Cortina home and Friday morning Annalie and me start rebuilding at leisurely pace completing the operation at about 17h00. We deserve a well earned earlier night having to rise at 03h00 Saturday morning.

Fossa in the news. During the week Fossa appeared in The Citizen newspaper, 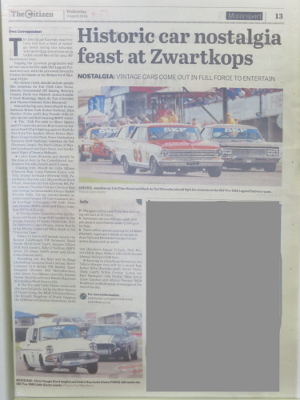 Fossa in The Citizen newspaper

And footage from Fossa’s GoPro at Midvaal featured in the Ignition TV program …. Will post a photo of the tv screen soon.

Loading Fossa proves very smooth and quiet. Arrival at Zwartkops Raceway shortly before 06h00 we can go straight in. Finding a spot kept for us by Gary Stacey behind his Mk1 Cortina we unload. 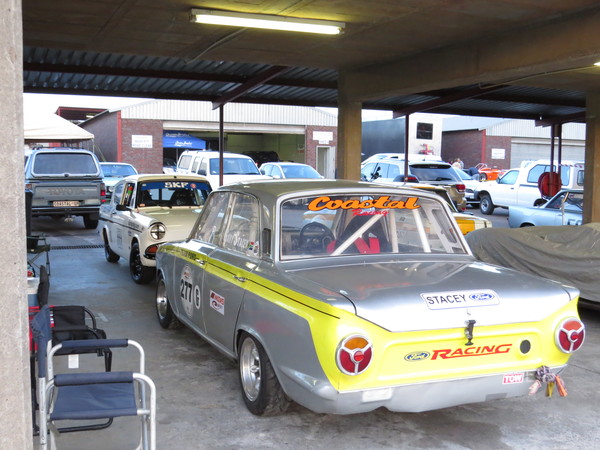 Gary Stacey starts the day off early by giving us this, 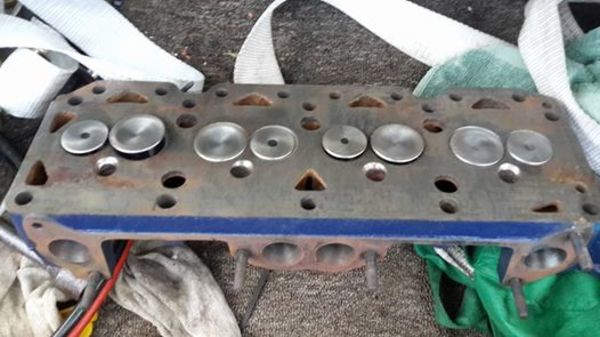 A new cylinder head for Fossa

Gary claims it to be my birthday present for the next twenty years …… Well, I trust the bunch of us will still be racing historics when I am 72, that way I can get another! Thanks Gary!

Qualifying: 07h20. It is a nervous me behind the wheel. Yet another first, with our new front suspension configuration. I do not have a clue what to expect. Tyres at a lower pressure that what I am used to. Corner two, Fossa wants to drift a little on her cold tyres. Corner five and six a repeat. Corner eight, Fossa really LIFTS her left front while sliding out her rear for a heart stopping moment. We complete five laps with lap 4 coming in at 01:29.52 and lap 5 at a 01:28.18. With our previous best of 1:28.63 we are all satisfied and looking forward to the race. As I was testing Fossa and not running her or the tracks limits I expected entering the 1:27’s …… 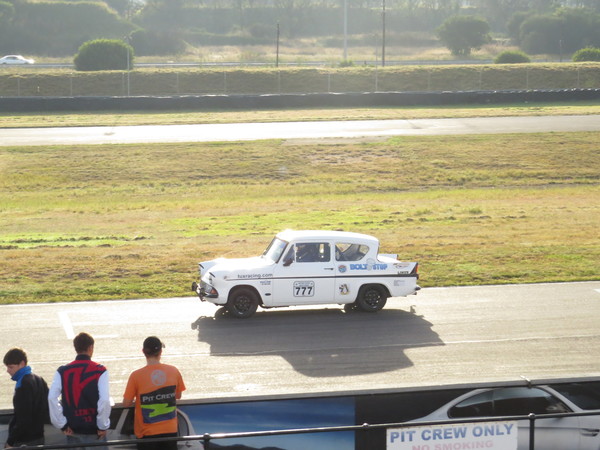 Race one: Two warm up laps, complete, everyone finding positions, and the race is on, exiting corner three race lap one, a noise, big end probably ….. Not a nice start to a race day.  Disappointment? Yes. Was so looking forward to it and with a hell of a lot of adrenaline pumping having to retire. Not fun.

I am finding a sudden increase in the need for speed! We are getting there, may be slow but it is certain! Today was a needed and deserved rest day. The way I know myself the damaged engine may exit during the week. The AX block is to be prepared and in blue as the Ford supporters like Johan De Kock claims it will give an extra few kilowatt! It will also feature the new head supplied by Gary!

I was surprised at the few spectators. These events are spectacular. The makes, models and types of cars take take part will satisfy any true petrol heads thirst! Zwartkops Raceway is a very spectator friendly track with big views of the action. Motor racing at it’s all time best! Come and join us!

Our next outing should see a change in rear suspension. Speaking of that, our next race is scheduled for 7 June at Zwartkops and maybe a test session at a Super Trax Day before then.

Greetings from The Team!