Well actually a decision has already being partially made.

After the purchase of the “dud” engine we purchased yet another engine, this time however not a dud. 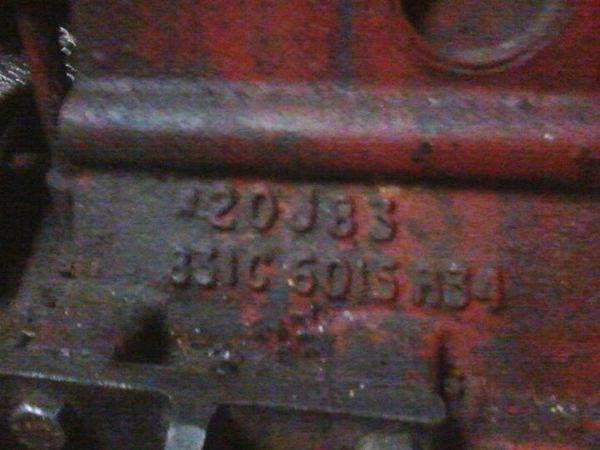 Apparently a much desired block

We follow up on a dead normal advertisement and head out to go and have a look. A trip of the beaten track to Roodepoort avoiding the dreaded disease etoll roads. On opening the bonnet of the Ford Escort I look and look again, it is not what I expected, no casting number beginning with 711…..

I immediately consult Google and result after result show reference to the AX block. With the owners permission and to avoid another dud head we split the engine and find a good head! We buy the engine!

Now we have four blocks, four heads of which three are scrap, four crankshafts one which is in Alberton, four camshafts of which one is also in Alberton ……. 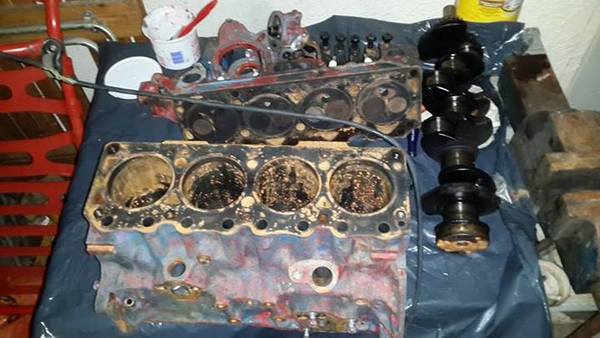 I strip and clean all our parts and compile a list of the size and status of all. Pity I want to use 1300 pistons as the pistons in our latest purchase is 40″ oversize and that is the size we need but 1600.

We decide to use Fossa’s 681 block for now and research and develop the 831C block as funds and time allows. At worst we have a backup!

We will be skipping on the Midvaal Historic Tour round one as Fossa’s readiness is doubtful and with financial year end will have me stock counting coming Saturday.

Most pictures courtesy of RacePics.co.za.

30 January; Desperate times calls for desperate measures. The exhaust branch acquired from Wildcat does not fit!  In the morning we want to head to Zwartkops Raceway …. I sit down to a task of joining her broken branch with an arc welder. So many possibilities … first attach to a spare cracked cylinder head, tack weld, then some reinforcements. Then joined with some unexpected  but grateful success! All in all we regard this weekend as a test session.

31 January; Fossa is trailered and on the way to the track in some incredible rain. Time of arrival shortly after six. We find a spot in the space allocated to the Little Giants, next to the McLeod clan’s Mk2 Cortina and MG. Rush, rush, documentation, scrutineering, unpacking Fossa and get ready for our first practice stint. It is raining cats and dogs. On her new treads, the only way, start lightly and steadily push to traction fail which happens when Fossa slides off to the inside of the track with tires screaming after corner five. 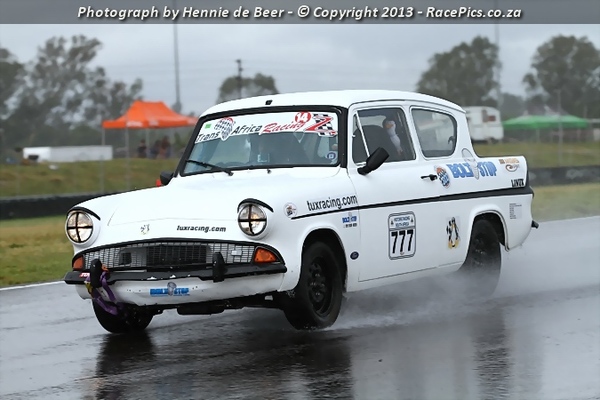 Fossa in the rain

Stint two takes place in varying weather from damp to very wet. We finish the stint without any incident. Quite happy with the comparative times of the newer and more powerful cars.

Shane, Maryka and kids join us. The time for qualifying arrives. Fossa starts out well and then starts stuttering after corners, not enough fuel in her tank. The track is a touch drier. We achieve a time of 1:33.03 that place us 32nd of 37 entries. Shane, Maryka, kids and Shane’s dad decided to sleep over trackside.

1 February; Race day. Race 1. For the day we are fitted with Deon Venter from Racepics’s GoPro on the roof covered with some blue “condom”. With Fossa’s tank topped up,  the previous days spluttering around corners was resolved. We were over taken by a few cars and we overtook a few cars. It seems we are some where in the mix more often lately. In the dry we get the first opportunity to really sus out Fossa’s new diff ratio. I am a bit concerned as I run up beyond six thousand rpm’s too soon and am in fourth gear by the time I exit corner three having to monitor and limit her rpm’s down the straight. The feeling is we will have a better balance with a 3.8 – 3.9 ratio. 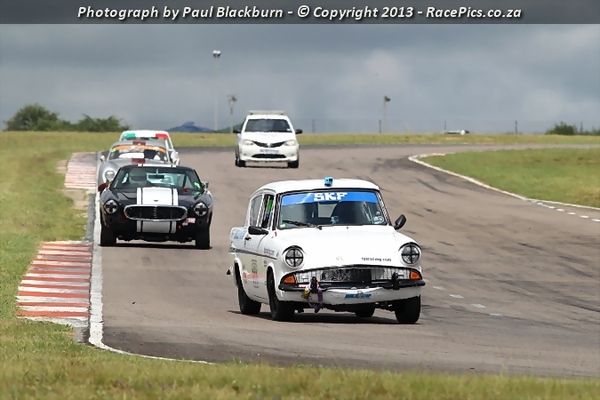 The race settles and I am in pursuit of a MGB when I see a little bit of smoke following Fossa at times and I drop the revs to facilitate completion of the heat. 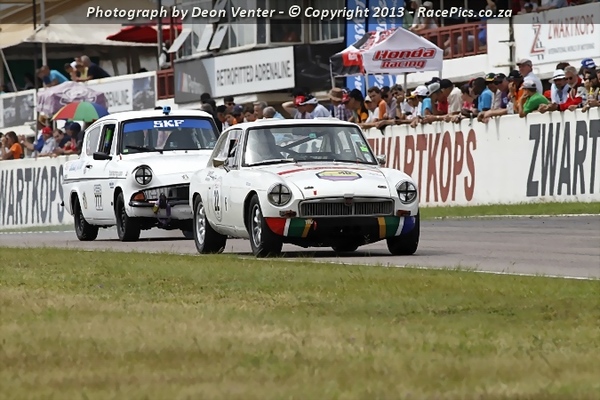 Back at the pits inspection shows Fossa is breathing out a bit of oil through her dipstick tube and this is deposited on her exhaust branch resulting in the smoke. We better our previous official time to 1:28.631.

Race 2. Not a hundred percent happy with her engine we decide to check her ignition timing pre race. Then Fossa decides not to start. We have exhausted the battery pack, have our Cortina jump starting, all with no luck. The final resort is to run start Fossa. Her timing is reset and the smoothness of her engine proves my suspicion to have been correct. Not that it makes any sense as her distributor is rock solid and fitted with an Accuspark. 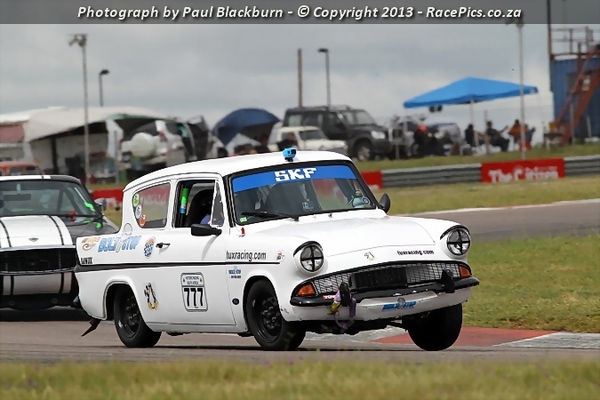 By all means still getting used to her new diff ratio and testing different gear choices around the corners Fossa clearly feels faster and smoother until the end of lap five, our best lap of the stint, suddenly RRRRRRRRRRRRRRRRRR……………………….. 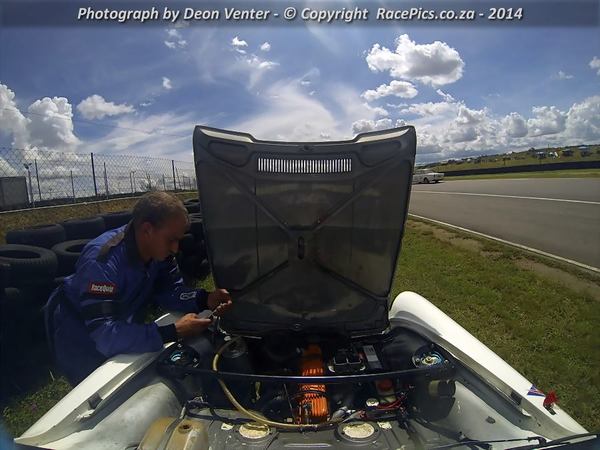 We secure second place for Class U. Not a good weekend for Anglia’s with three sustaining mechanical damage.

What a mission to load and offload a non runner Fossa. Sunday we start in investigating and found out what RRRRRRRRRRRRRR means ……. 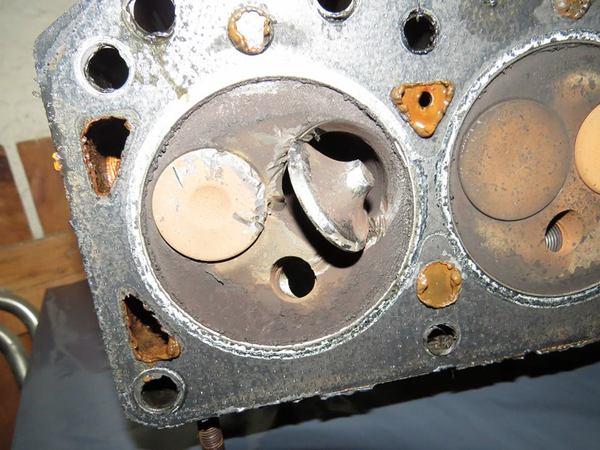 The search for a replacement head is in progress with one cracked dud acquired so far. For now I will drool over the pics taken during the event as it is unknown when we will enter our next race even if Fossa is repaired as this exercise has drained our resources.

A BIG THANK YOU to our friends and supporters, to all that promised they will be there and were, it is much appreciated! YOU ROCK!