Up at 03:00, on the way at 04:15 ….. Using an alternative route to Midvaal Raceway Annalie and I arrive at 05:45. The Roach once again opting for lan games. It is dark and cold. With our next event about 700km away at the Dezzi Raceway we enter Pre66 Little Giants and for the first time, the Historic Pursuit series. The idea to enter two races at Dezzi’s and find our feet prior to an entry in both events down south. Unfortunately the Pursuit race in Oslo Beach will not be taking place this year.

Fossa Ford Anglia is unloaded, Unable to attend on Friday the rush for documentation, scrutineering and drivers briefing with our first qualification listed for 07:15 …… 30 events for the day on the programme, it is going to be a tight squeeze.

Qualify, Pre66 Little Giants, U2 and Sports and GT, listed for 07:15, our first view of Midvaal Raceway in an anti-clockwise direction. Track surface have been patched in places, still a very challenging circuit, a entire resurface would really make it a top track. We run a 1:33.140.

Qualify two, return to the pits to join the next outing, qualify for the Pursuit Race. This was actually a strange feeling, heading out and seeing all the guys warming up tires and Fossa already on excellent traction. We run a 1:32.805.

Race one, Pre66 Little Giants, U2 and Sports and GT. Racing to me is always racing and not qualifying ….. I am surprised to find three top class cars behind us as I expected a rather dull race as once again we are the only class C car entered. Yes, this does have us thinking. We are not about spend more on our Ford Anglia in an attempt to get more competitive and join class B or A. And I want to play same as everybody else … Well, two of the top cars clear us rather quickly as expected and the race challenge come from a rather unexpected field, a Pre90’s Porsche raced by Mark Saunders. Thanks, I had some sort of target, 😉 . We run a 1:30.037. 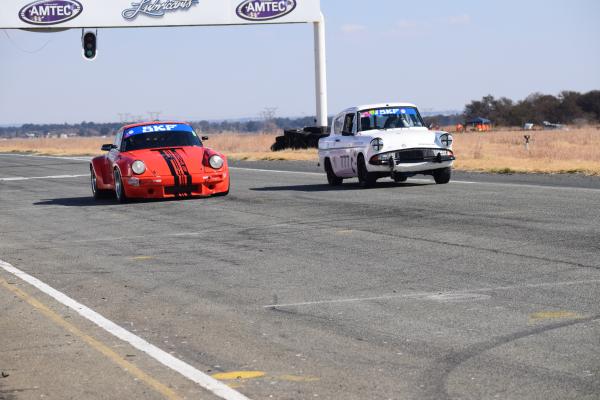 Race one, Pursuit Racing, We have one race break between the two. Time to check vitals and top up her fuel. We line up for our first Pursuit Race, once again we are on still warm tires. We depart 1.08 minutes after Robert Clark’s Citroen GS and a Mk1 Ford Escort separating us. Behind us in hot “pursuit” the gigantic Mercedes 0.08 seconds behind …. I had a good idea that we will break out and with that in the back my mind …. we break out. Catching up with the Escort and the Escort catching up with the Citroen we seem to reach the Citroen at about the same time just before the long straight I witness the Citroen’s break dances, or maybe brake dancing as the Escort pass and I have the straight to follow suit. Soon I have the Mercedes looking at catching a lift in Fossa’s boot, I just knew it would not fit and let him through. We finished second but both of us broke out.

With the South African winter sun getting ready to call it a night, some negotiations have us doing our remaining races in succession. Fossa’s fuel tank topped to the brim and I still wonder if she will finish both races on a tank as she seems to be rather heavy on juice ….

Race two, Pre66 Little Giants, U2 and Sports and GT. From the start it is me and Mark, the Porsche clearly enjoying more speed in the straights and Fossa getting closer in the corners. some corners hopping through others with a hint of oversteer. It can not be said that we did not try our best. This time around we do a best lap of 1:30.770.

Race two, Pursuit racing, head straight into the pits to line up, this time around we are following the Citroen and another Mk1 Ford Escort. This time round we pull away at 1.17 seconds after the Citroen. Things seem to be better balanced as we only start getting closer to the Citroen towards the end of the race and more cars catch up and pass which was my experience from watching the series as a spectator. Unfortunately I seem to have lost the lap time sheet. Thanks to the Pursuit Racing guys for the opportunity, 🙂 . I must admit the constant challenges of catching and being catched makes Pursuit Racing very tempting. By all means, anyone can win, whether I am up to the maths ….

I had four races to experience that left hand corner at the end of the main straight, what a feeling. I take my hat off to Fossa Ford Anglia’s resilience, the Kent engine worked very hard …

Fossa’s refusal to start had Annalie and others, (thanks!) push start a stubborn Ford to fire! With that her shoulders have left her in pain with limited arm movement.

Our next planned stop, Dezzi Raceway, 10 / 11 August, Fossa’s next visit to the Indian Ocean. To do list, oil and filter change. Investigate a fuel leak between the side drafts and the manifold …. ‘Till next time, cheers.