Being of the employed kind, this time round we head track side on Saturday morning. Happy as two members had a spell of some bug during the week. We find a pit spot in the overflow area and after Fossa is parked, time for an Aces Cafe’s BECT.

Race one: We head out on track leading class G following Chad Ten Doeschate’s Nash Metropolitan with the Alfa Romeo GT Sprint of Jaco Taylor Snr not lining up at pre race. Next in the queue Melanie Spurr in the Consul. Taking up position behind us Clive Winterstein’s Porsche 356A.  We are soon passed by the Volvo P1800 of Vic Campher after he had to start at the back breaking out of class in qualifying.

Chad starts running away and behind us the pressure is being kept high with Clive and a dark horse, Mark Van Rooyen with his Sunbeam Alpine and Terence Tracey armed with his Ginetta G15.

OOPS ONE. Pressure building like a highveld thunderstorm behind us, a few laps in, heading to corner five, release the accelerator to jump on the brake, Fossa’s carburettor is stuck in the open position, throw her into third and heavy braking to slow her down and prevent the Kent from over revving followed by a rather hair raising corners five and six.

A running decision has to be made, carry on and do a best effort or retire. At times the carburettor releases, at times it get stuck and I don’t know where what …… Decision made, no decision!

Terence’s Ginetta has an incredible burst of speed in the straights almost like too large choke tubes giving poor cornering speed. Our group share the lead with Terence shooting past and Mark passing us exiting corner three during one of the Ginetta’s recovery phases. From there on it is basically a race between Mark and me with the occasional visit from Terence …. and a semi stuck carburetor. 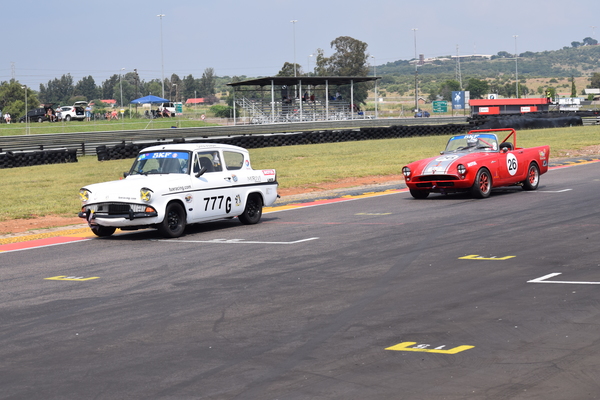 Race two: We start a few positions up due to non finishers in race one. The procession of non finishers and the faster Volvo pass …. And race one is continued …

The Sunbeam Alpine looks like a trailer behind Fossa. At times the nose of the Sunbeam pull in next to Fossa in corner two, with Fossa pulling away down the straight.

OOPS TWO: Mark Van Rooyen’s Sunbeam Alpine on my tail have us break out of class G on lap seven. Now, this is going to have us racing harder to get more competitive in  class with the target currently being the Nash Metropolitan and that super Ford Consul with Melanie Spurr behind the controls.

To catch the Nash we have to cut down 12 seconds over race distance, that is 1.5 seconds per lap ….

And there is some news for Mark Van Rooyen, just for pushing us into class C, I will be tempting you and pulling your red wagon across that line, 😉

Somehow I can not see the Ginetta stay in class once all it’s teething problems are sorted. That car is extremely fast …..

A check on the vitals of Fossa today and I have just sent our entry form for the Extreme Festival at Kyalami, 22 April 2017 …. Trusting we will have better luck!!!!