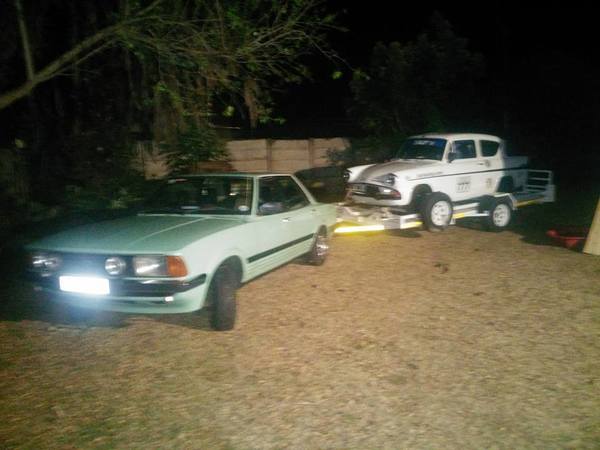 A lot of hard work, building larger gates later, we are able to now load Fossa the day before our outings. This is a real time saver and thinking of loading in the early morning in the rain, stay wet a cold at event can now be eliminated.

Redstar Raceway, 6 August 2016. Fossa’s “new” trailer proves a breeze to tow. We arrive a cold Redstar Raceway shortly after six am. At first I am pretty relaxed, Petrus (Total, South Africa) arrives surprisingly early about fifteen minutes after us. Wonder if he is regretting his decision being at a racetrack in the dark and coolness … The relaxness departs standing on one of the pavilions looking at the track looking the other events qualifying ….

We end up pitching camp in a rather dusty veld far away from all the other action taking place on track. We are almost parked in and have to find a route to get to track for our events. A better idea would be to demarcate areas visibly for competitors use only with easy track access. 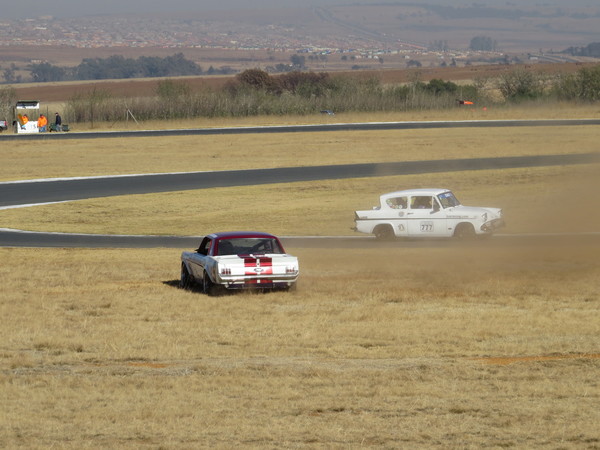 Fossa passing a Mustang during its rally stage

Qualifying: 2:49.431. Qualifying is always a rather mixed bag as cars pull in at any time during the allocated time slot to come and strut their stuff. Getting a nice clean lap often not possible and then our first time on this track with the reputation of changing track drivers into rally experts …. Manage to keep Fossa on the black stuff in what I considered to be a scouting trip. It is an exceptionally busy track, left, right, left ….. right and right about here you realize you are confused or have been for the last two corners already. You can not afford not to concentrate. 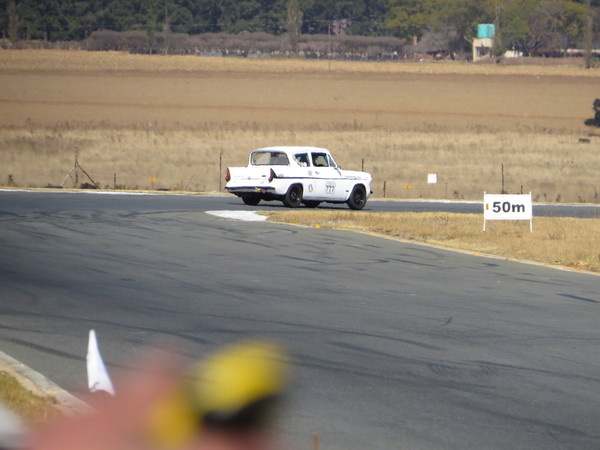 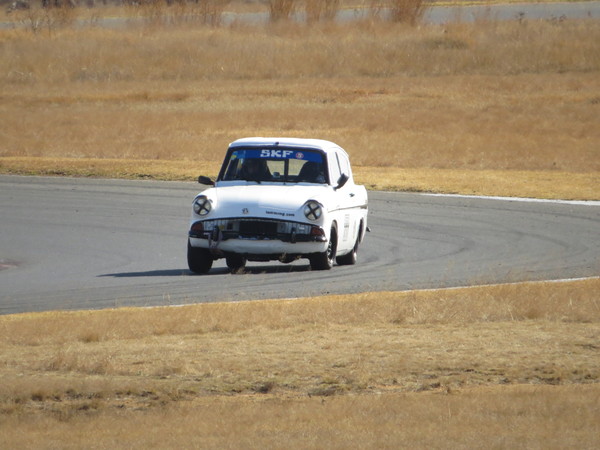 Race 1: 2:45.100. Being more structured in a sense knowing you are going to be lapped with a Mustang and a Camaro in the mix but there will be a few laps of fun without “interference”. My target, finish the race and try and add some fun. The fun starts soon as this flat track allows for extreme cornering and I can see why so many will end up in the rough. 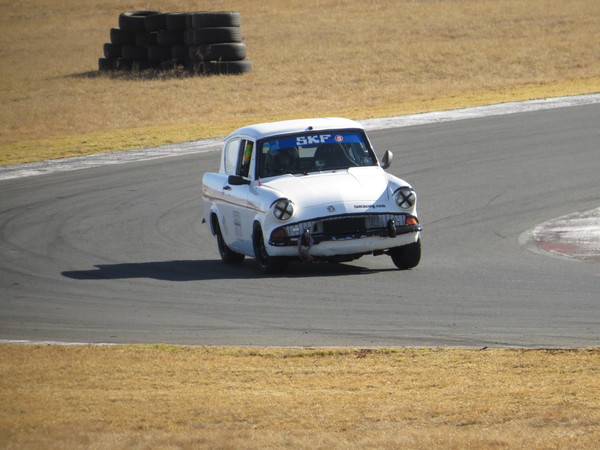 Race 2: 2:40.846. The environmental temperature and sun have increased to a rather scorching feeling. Based on the Fossa’s temperatures post race one is a bit of a mental concern. Also monitoring her oil pressure in heat one I have wonder how the Total 5000 mineral oil is going to keep up …… Lap one I realize, that 36DCD is keeping up with my demand and I decide this is going to be a road race and a true test of our capabilities. I hitch up behind and an Alfa in a tussle with a Mini. The idea to stay as close to them as possible, at times they pull away and we are able to play catch up. With the Alfa’s ability to break through class U times at Zwartkops Raceway with a time of 1:24.79 this experiment is going to be interesting.

The results based on the best lap times in race 2;

Smoking, the pic of the day taken by The Roach

The fun is testing new limits with that 36DCD having Fossa screaming all four tires and at the few occasion sliding a bit around the corners. Going through the twisty bits is literally throwing Fossa from the one side to the other. It was good to have the same quantity of laps as the other races. A lap counter would have been nice and a last lap indication would have been cool.

As usual on race completion, Petrus produces the thermal camera taking readings of the engine and other interesting components. The exhaust branch measure a cool 274°, matching the front brakes …. Almost as hot as the driver!

After the race we go and enjoy a nice cold beer and meet up with Paul Blackburn. I am very quickly told of my one two wheel on the soft stuff and that has the evidence. I was NOT aiming at the photographer!

The day started off very early. Upon my arrival I could see that Fossa was looking good even before getting warmed up. I then immediately got the feeling that today would go well. The weather was also perfect.

Today was the event that we decided to use to test out one of the oils we had previously intended to test out on Fossa to enable us to get the near perfect oil for the application that Fossa is being used for.

Fossa had previously experienced some technical difficulties on the track, and sometimes did not even finish races. So on this morning everyone was nervous. The driver was nervous about Fossa and the new track since this was the first time our driver would be competing on this particular track. The pit crew members were also nervous, not only about Fossa and how she would hold up, but also because our driver was not familiar with the track.

After doing pre-trip inspections on Fossa, it was time for the qualifying laps to be done. Our designated driver managed to keep Fossa on the black stuff which saw to it that we get a good start up position for a car in its category. Chris and Fossa had their hands tied as they diced with vehicles younger and with bigger engines. As tough as it was, both Chris and Fossa did a great job keeping the other vehicles on their toes.

Upon returning to the pits after hard driving around the track, results in terms of position were shared then everyone went back to their cars to prepare for the actual race. Oils Pressures and Levels were recorded. Wheels were torqued.

Time came for Fossa to go race. She did well and finished the race with well improved lap times. This proved to us that Chris was getting with acquainted with the track. Another sign was the sound of all four wheels squealing as Chris and Fossa came around the various corners of Red Star Raceway. On their return, engine temperatures were taken, oil levels and pressures checked and finally refueling.

Fossa was looking good. There was no need to open her up and fix anything. No oil leaks spotted. After lunch preparations for the last and final race were underway. Fossa was still looking good and sounding good. No smoke was coming from her. She went onto the track and Chris did what he was called for, which is to race Fossa. They had lots of fun on the track, and this was evident in the improved lap times.

Fossa did it. She completed her race without any mechanical breakdowns. She was still in such a good condition after a long day on harsh driving. One could literally drive her back home.

The figures are looking better than before. We now look forward to the next event so that we can test out another oil to see if there will be any improvement in the times.

Thank you for the support TOTAL. Usually associated with the leading Toyota’s on off-road circuit, this is much appreciated. Now for the next oil to be tested, the one I favour, though the results will only be released after all the test have been completed.

Our next race should be 8 October at our second home, Zwartkops Raceway. I would like to attend at track day at both Redstar Raceway before then to both test the 36DCD at Zwartkops and to take the team and Petrus around Redstar, 🙂

From a smiling Fossa Ford Anglia and team, cheers

Despite the silence on the site, we have been rather busy. The home project mentioned in the last post is nearing completion, 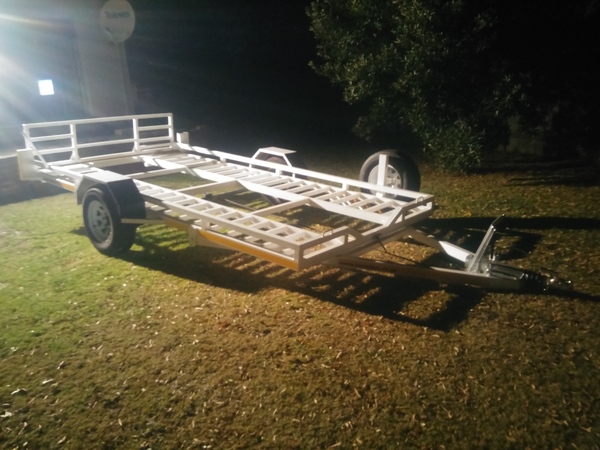 After some research we decided to go back to the future and run Fossa on a similar carburettor that we first ran her with in 2012. 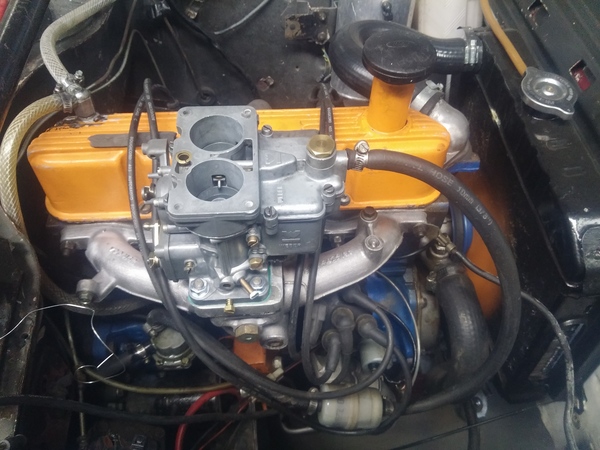 The 36DCD Weber supplied and prepped by SP Carbs will be tested to limit at the Redstar Raceway on the 6th of August. It is a track which we have not yet competed on and arriving Saturday for qualifying and racing is rather exciting. And to top it, all the Pre ‘66 Saloons, Pre ‘66 Sports & GT, Little Giants and Trans Am’s will be running in the same race!

Another highly over due project, sorting our available spares and tools are taking shape nicely. 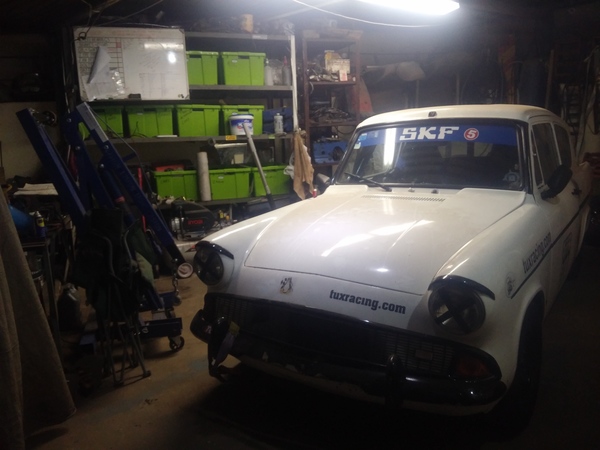 That’s the news for now. Will give feedback on our Redstar excursion soon!