With our racing budget for the year depleted and us looking at spectating at Kyalami, an offer from Ricky, G&H Transport, enter 111’s at the extreme festival, Zwartkops Raceway, he will sponsor our entry. Contact the organisers, attempted phone call and a sms, clock ticking, no feedback. Advise Ricky.

Racing opportunities on the legendary Kyalami track, with only limited race days scheduled for 2018, a little too rare …… like a badly prepped steak ….

The brains start scrambling, racing flows through the veins straight out of the Esses up the hill a left hander around Leeukop off the brake and onto the happy pedal lifting the volume of the Webers accelerating down the Mineshaft through the left hander trying not to touch the brake hard onto the brakes squealing tires right through the multi line Crocodiles ….. and Fossa Ford Anglia squashes our hearts runs over our wallets and squeeze out our holiday money …… and WE ARE RACING AT KYALAMI 2 DECEMBER 2017.

Nobody know how circumstances will impact our aspirations in 2018. Grab the opportunity.

We are going into this blindly, we have no idea who we will be racing if anybody. Just go out, do our utmost best like always, push the limits and build yet more memories. There must be many teams like us, breaking barriers to participate, we trust there is some appreciation of the teams out there. Come out and enjoy the racing, see you there,

Early morning, 28 October 2017 we head out to the Delmas based Redstar Raceway for our second racing visit to this track. Fossa Ford Anglia’s engine proving itself during the track day at Zwartkops Raceway, everything sorted. It is an very cold and damp morning.

Thinking about finals, you never know when it will be your final race or your final anything. We do not not know what the future holds for us. With that in mind, the idea is to push hard and do the utmost best on every outing. The results from our last track day gives the idea that we can break out of class, Annalie, Tea-m Manager wants a trophy and not a break out ….. 😉

Qualifying: Fossa Ford Anglia initially have the odd slide on the “damp” track but as we get some heat into her semi’s traction improves to some screaming. 2:44.945, a bit better than last year’s 2:49.431. 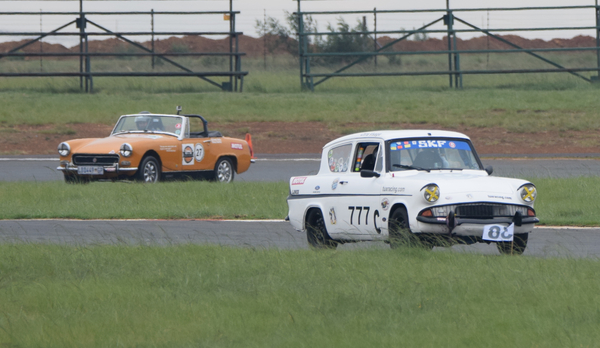 Fossa and the MG

Race one: Chad Ten Doeschate promotes a reverse grid. We line up and have a new driver joining, William Kelly in a MG Midget. William qualified at 2:45.527, just about a half a second shy of Fossa. With the differences between our Ford and the MG, it is a cat and mouse game the duration of the race, Fossa pulling away in places and the MG catching up in other. Comparable lap times of our last visit 2:45.100 to now 2:41.930 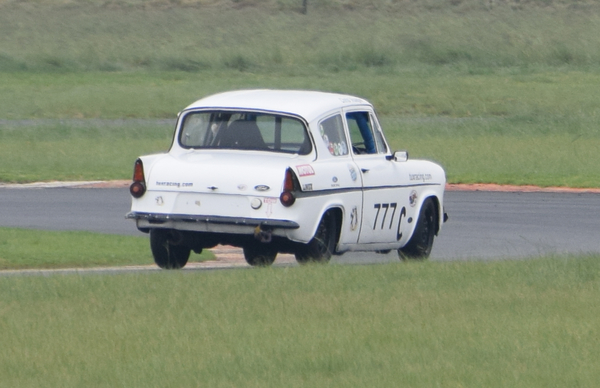 Race two: Reverse grid again, the fasties go by and William goes through. The difference of the strengths of the cars and drivers visible. The MG seems very stable around the corners, not sure just how hard William was pushing. Our Anglia the better at top speed, but rather shaky in the corners. So shaky in fact that the seat mounting breaks and I suddenly face two challenges, the MG in front and the seat. I pull the chest straps of the harness, that gives some stability as I am virtually part of the roll cage. Fossa’s gear ratio also a challenge. Running clockwise corner six too fast for second and to slow for third … Sometimes the MG seem to disappear, just to reappear, and then close enough, main straight Fossa catches up and passes William’s MG. It is obvious that I have rethink Fossa’s suspension setup within the rules .. The Roach have some photo’s of Fossa almost becoming a motor bike with only two wheels is definite contact. Lap times last year for race two, 2:40.846 and this year 2:38.596

Another lesson to take from the event, William and his MG are going to become players in class C or B.

Looking at photo’s taken by the Roach there are a few MSA approved photographers trackside, just wondering, where are their photo’s published. Are they only capturing for certain races or racers?

As for the immediate future. Fossa is parked in tip top shape. Maybe a track day before year end and push that class limit. There is one race left on the race calender, Kyalami 2 December. We have however already reached way beyond our racing budget for the year including the opportunity to race at Dezzi Raceway. Unfortunately, Fossa will not be making her appearance there. Pending spectator entry fee, we may attend with our camera’s.